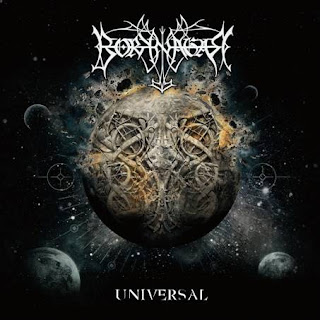 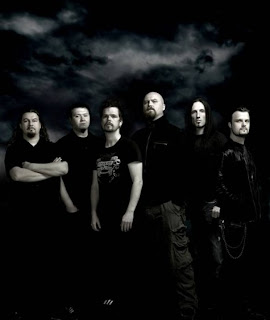 For The Whole World to Hear.

Borknagar is a progressive black metal band from Norway. Any fan of black metal knows the extensive history behind this band, from super-group beginnings of viking metal to the more progressive natured black metal of nowadays. "Universal" is a record that encompasses everything from their past and infuses it with a spirit of regeneration to keep it modern.
It's been almost 4 years since Borknagar last released an album, 2006's "Origin." This album does not take a lot of what was on that record and add it to it's sound. There are still moments of more progressive rock and folk on "Universal," but they're intertwined with the metal, not separate from it.
This record contains some of Borknagar's most epic sounding songs to date on it. Even in opener, Havoc, there is a feeling that surrounds the song in a very, almost euphoric way, giving it that epic nature. Both the instrumentation and vocals are performed excellently. Throughout the entire song, Lazare' keyboards and synthesizers bring an orchestral, yet psychedelic, vibe to the more black metal oriented style of the guitars. Vintersorg's vocals soar above during the chorus of the track, creating something incredibly infectious.
Something that this band has done on their recent album continues to be present on "Universal," and that is the mix of every instrument. Nothing is unheard on this record, even the bass is quite present in the sound, and is never hiding beneath everything else. The whole record is like an open book, allowing you to hear whatever you may like without having to search for it.
This is also a good case of musicians being able to create songs with hooks and still be trve to their sound. Never one to abandon the black metal touches of their earlier work, it is still here, and some of their fiercest yet. Maintaining a strong style that depends on every player to show their abilities and not show off or try to be as flashy as possible.
From the blazing guitar riffs that Oystein Garnes Brun and Jens F. Ryland provide to the ferocious drumming of newcomer David Kinkade. These three members create that old school black metal sound that is on every Borknagar record, while it is bass player Tyr and keyboardist/vocalist Lazare who provide elements of more progressive music to the sound.
Tyr definetely makes his presence on this record known quickly. Utilizing an 8-string bass without overdoing anything is an impressive feat. He never comes out an attacks you with the bass-lines he creates, but slowly makes himself known to your ears as tracks progress and evolve.
Meanwhile, Lazare performs both vocals and keyboards on this album. The vocals he does are mainly back-ups for Vintersorg but steps up as the main vocalist in a later track, that will be described later. His keyboards give this album a major 70's feel. Using more old-school mellotron and synthesizers instead of more modern keyboards, he demonstrates the most soloing on the record. His work on this record is a real treat to listen to as he both utilizes subtlety in his playing as well as when he plays up front.
Vocalist Vintersorg has also stepped up his game for this record in writing some incredibly catchy vocal melodies. He utilizes both his clean folk-singing and his harsher black metal screams on this record, with tracks like Reason being dominated more by the harsher side, while Worldwide features more of his cleans. Both of these tracks cannot describe the presence that he has on this record, walking a thin line of being always present and annoying.
Songs like For A Thousand Years to Come have some of the most progressive moments on it. While it still maintains it's more black metal formula, it moves through different phases of intensity and beauty. The ending melodies that Vintersorg and Lazare provide in the vocals are some of the best Borknagar have ever had. While Fleshflower mixes things up a little bit. Both musically and vocally speaking, this track is unique compared to the other tracks on this album. Vocally, Lazare provides a lot of the main vocal lines, while Vintersorg provides the back-ups. Musically, this song has an almost retro feel to it, with the guitar lines being very melodic and the keyboards maintaining the 70's approach that has been on the whole album. The track appears to mix old Borknagar styled viking metal with more melodic prog-rock.
The final track, My Domain, features some beautiful melodies provided by previous Borknagar vocalist, ICS. Votex, also known as Simen Hestnaes, previous bassist/clean vocalist in Dimmu Borgin. This track is short, but concludes the album on a serious high note. This track is more doomy than the other tracks on the record, but is still emphasizes the epic nature that the rest of the record has demonstrated.
Overall, "Universal" is an excellent album, right up there with the best this year. Surpassing Borknagar's previous efforts in recent years by far. Showcasing both elements of beauty, progression, intensity, and brutality all within songs individually and together. This is one of Borknagar's finest moments.
Overall Score: 9.5
Highlights: Every song is a highlight
Posted by maskofgojira at 3:44 PM