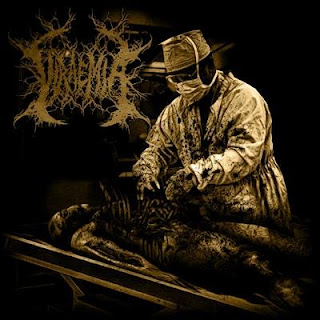 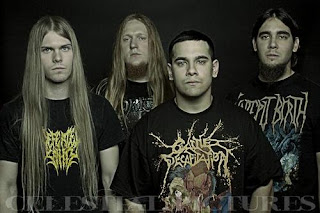 Viraemia is a technical death metal band from Arizona. Though this is their first EP, they have technical skills up to par with those bands held in high regard in the tech-death scene. Taking elements of melody, progressive/technicality, and brutality and using them all together.
This EP contains just 5 tracks of intense death metal. While technically proficient with their instruments, this is still a debut, and it shows. Some of the transitions from a brutal death metal section into a more melodic part is a little choppy sounding.
Containing just the 4 band members, this band has managed to create a sound that, while still not quite original, branches off into a sound that could become their own. Vocalist Tony Martinez, showcases a range that demonstrate multiple styles, from deathcore screams to more brutal death metal/grindcore lows. While guitar player Josh Hernandez has quite a talent for fretboard work, moving from technicality to melody to a brutal breakdown within several seconds. But bass player, Scott Plummer, is the real highlight player on this debut. Featuring a 10-string bass that moves with the guitar in and out of musical sections with ease.
Opener, Disseminated Intravascular Coagulation, is fulled with all the elements that are described above. As an opener, this song fits perfectly with their tech-death style, containing fretboard mastery and the use of a bass that follows the guitar perfectly. This track is the one you want to listen to when you first hear of this band.
The second track, Necrotizing Fasciitis, contains a sound more akin to that of deathcore or brutal death metal. Elements of bands like Defeated Sanity or Deeds of Flesh can be found throughout the song within the more brutal breakdowns and lower vocals. While showing a different side of Viraemia's style, it doesn't quite follow up to the opening track.
Cancrum Oris, is a song that mixes the first 2 tracks together in a way that still keeps it quite interesting. While containing the more technical side of the opening track, it also contains the breakdown. This track is overly entertaining to listen to due to it's constant shifts in styles, Martinez shows a great talent for death metal vocals in this track, shifting from higher deathcore vocals to a lower, more brutal death, sound very quickly and efficiently.
Pit of Pestilence follows suit, being another mind-blowing technical assault. While remaining quite technical, the bass is what dominates this song. While still following the guitar's fret insanity, the bass goes off on little tangents which keep it the thing to listen to on this track. Fans of the second track off this EP will find a lot to love with this track, with Martinez demonstrating an almost grindcore register to his vocals. This track is possibly the best mix of styles and blending them together effectively on this debut.
The final track, The Prodromal Phase, sounds the most consistently chaotic throughout. With riffs bringing a mix of jazz into the mix with the more brutal deathcore breakdowns reappearing. Though this is the track that features the most wild sound, it doesn't quite fit with the more "melodic" approach that the other songs contained in their sound.
Overall, this EP has a sound that is unique, but also still rooted in the sound of their influences. Viraemia has not yet shown their full ability as songwriters yet, still remaining within boundaries set by other bands and the genre itself. As time passes, hopefully we can see where this band goes.
Overall Score: 7.5
Highlights: Disseminated Intravascular Coagulation, Cancrum Oris, Pit of Pestilence
Posted by maskofgojira at 11:33 AM