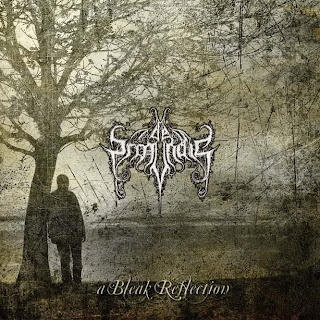 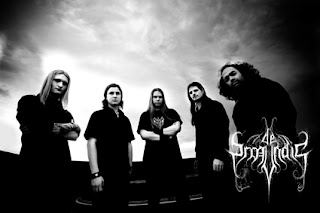 De Profundis is a progressive extreme metal band from the UK. As with most extreme metal bands, they pool influences from progressive rock into black and death metal and meld them together. Though this is nothing new, what De Profundis is doing with these influences creates a unique blend of old and new elements that give them a sound that is unlike many other newer bands today.
After the brief opening track of The Ephemeral Burden, which is an acoustic passage with strings and piano following in the background, things get going with Ablaze In Autumn Fire. The first thing that will hit you in this track from the beginning is the bass. The tone and playing style of the bass is extremely well placed in the mix and adds a very unique sound to the band.
The bass, as already stated, is very unique and brings to mind bass players like Lars Norberg, from Spiral Architect, Jeroen Thesseling, from Obscura, or even Sean Malone, from Cynic. The bass is audible to the point where it is near the front of the sound with the guitars. The overall tone brings to mind an almost jazzy flavor to the band.
Vocals also stand out. Bringing a cool fusion of death metal growls and black metal screams. Though this is not really all that original, the way in which he performs it makes him stand out among many others doing the same thing. This style compliments the doomy moments of De Profundis' music perfectly, shown on a song like Cease to Be for example.
The guitars bring a very Opeth meets Ihsahn's solo work vibe. The guitars carry a large amount of melody to the sound, which counteracts the aggressive picking that goes on. While the basis of the style that the guitars carry with them is largely black metal, elements of acoustic/folk, doom, and death all come in to play in certain songs.
While the riffs played are not as much a highlight as the bass or vocals, the soloing that goes on this record is a highlight in itself. Exploring different styles throughout the record allows different solo techniques to be explored as well. From more melodic and soulful solos on Nocturnal Splendor to the more thrash-n'-fast solos on Crimson Black Bleeding.
The band truly comes into their own when they're not trying to write complex long songs, but more flowing tracks like Crimson Black Bleeding or Nocturnal Splendor. When they can mix melodic and progressive elements into their music fully without looking like their showing off. That's not saying that their longer songs are bad, but that your mind can wander while listening to those tracks.
The last 2 tracks are perhaps the most interesting on the album. Longing is an almost 6 minute long instrumental. Though it sounds boring on paper, elements of the acoustic come in, but are combined with elements of latin-jazz-fusion, giving it an almost Caribbean feel before moving into more traditional prog-metal. Solos are used throughout the entire song, later on even including a bass solo.
The Mourner is one of those songs that perfectly sums up what the band is in a single track. Utilizing all the elements found on previous songs and putting them all together in an extremely catchy way. From the jazzy middle sections to the more melodic black metal riffs that carry the song to the doom elements found throughout the chorus. Though I already stated that longer songs from this band could make your mind wander, this track is the exception to that, being one of the most progressive tracks on the album.
Overall, I could see this album being an underground album that many will enjoy. From the Cynic and Opeth tones that are used to help define this band's sound to the song's compositions themselves, this is definitely an album to look for and check out. Though this album will surely not get them love from everybody due to their move extreme side, but those who approach it with an open mind will find the elements mentioned above and more.
Overall Score: 8.5
Highlights: Nocturnal Splendor, Cease to Be, Crimson Black Bleeding, The Mourner
Posted by maskofgojira at 1:14 PM