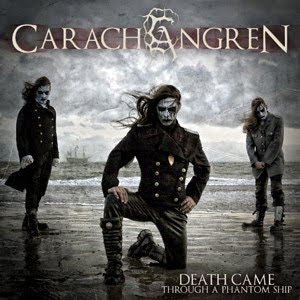 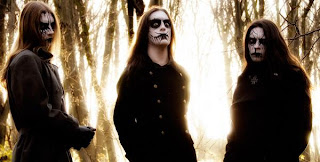 Sail The Seas On A Black Ship

Carach Angren is a symphonic black metal band from the Netherlands. Not to deter a reader any further, yes, this is similar in style to both Dimmu Borgir and Cradle of Filth. All the theatrics are on this album, but unlike them, and many other legions of symphonic black metal bands, Carach Angren can actually manage to keep your attention.
Many will, and rightly so, compare this band to those above without even listening to a note of their music; but this is not what you should do. This band actually manage to create cool concepts that rival that of the mighty Cradle in statue. Both this new record and their debut feature dark concepts that are both very up front lyrically, but also leave enough room for interpretation of what the concept actually is talking about, though not as much on this record as the debut.
As for the music, they are not using an entire orchestra like Dimmu or Cradle, they are using the synthe, but actually are quite straight with a listener by not trying to make everything so orchestrated that the actual riffs suffer. The playing on here is top-notch by all the players. The riffs are heavy and melodic, with the occasional progressive inclination thrown in. The drums are fast and contain your average blast-beat and heavy use of double-bass. But it all sounds very dark, which might confuse you, but once you hear this you'll understand.
The same can also be said for the band's song-writing abilities. While heavy riffs, tight drumming, and major orchestration are used fluently throughout, they wouldn't mean anything if the band didn't have a talent for writing good songs. These songs owe a lot to progressive music when structure comes into view. Bands like Opeth or Emperor both have equal parts in Carach Angren's sound and the way these songs are put together makes them much more enjoyable to listen to repeatedly.
Carach Angren is also not as theatrical as their predecessors. While those bands are easily overtaken by their concepts and orchestration, thus the music suffers, these guys don't use that fancy synthe work as a crutch. The synthe work on here can be a deal breaker due to the fact that it is used more for atmosphere more than anything, but does come up front with for more neo-classical playing. While an entire orchestra was not used, it has a much more real sound to than most bands. Not only due to the mix, but also to the mix of different sounds from an orchestral point of view. A string section is certainly used a lot, but piano, brass, and even a little bit of woodwind samples are used, like in Van Der Decken's Triumph.
As much as symphonic black metal relies on the use of keyboards or orchestras to help add an atmosphere, as they do on here, the guitars seem to be able to keep your attention. The riffs being played are a mix between more melodic death metal and black metal riffs, interspersed with some progressive and neo-classical solos and melodies. While not totally original sounding, they are more entertaining than most bands in the same boat.
The vocals also are quite interesting when compared to other bands second records. Seregor's vocals are quite diverse. While his primary style is a regular black metal rasp, he mixes it up with some clean vocals in And The Consequence Macabre and some death metal vocals on Departure Towards A Nautical Curse.
Overall, this is an enjoyable record that expands on their debut. While this band is fairly unknown right now, people should really check them out due to their actual talent for creating a unique sound and songs. This should appeal to people who like both black metal and death metal, granted that it's either more melodic or progressive than just the normal boundaries that hold the genres. Check these guys out if you haven't already.
Overall Score: 9.5
Highlights: Every Song Is A Highlight
Posted by maskofgojira at 9:35 PM