Sikth - Death of A Dead Day 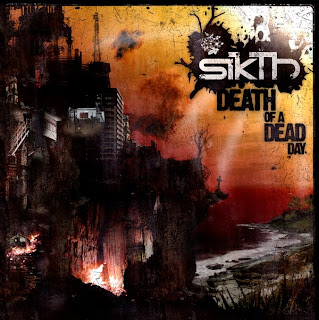 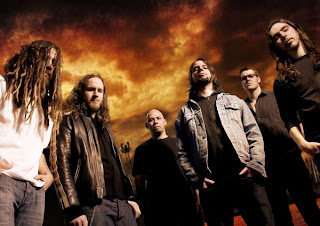 Metal You Wish You Could Get Away With.

Sikth, a band from the UK that has since broken up after this album, is one of the most underrated bands in the current metal scene. Having brought influences from the most extreme and obscure regions of metal to the most mainstream, and putting them all into a blender. Tech-metal is a term that has a lot of bands labeled, some deserving, some not, but this is where the term is most comfortable.
From the very odd mix of progressive metal, death metal, metalcore, nu-metal, mathcore, and thrash metal, every song has something different in it. Nothing on this record sounds like it's been rehashed or stolen from another band, something always shifts into their own style. Whether it's a breakdown or a chorus, everything on here sounds like Sikth's own unique style of metal.
The playing on this album is superb sounding. From the angular riffs provided by guitarists Dan Weller and Graham "Pin" Pinney to the odd-timed drumming of Dan "Loord" Foord. From the constant shifts of opener Bland Street Bloom to the more melodic approach taken on Where Do We Fall? it's all a take on a formula you've heard before, but done differently. Riffs take the sounds originated by bands like Meshuggah, Korn, and The Dillinger Escape Plan and seem to throw them at a wall at random, but all seem to function together. Whether it's in the form of technical insanity in Part of The Friction or melodic flawlessness in Where Do We Fall?, these guys show how guitar playing is meant to be done if your playing in a new metal band.
Vocalists Justin Hill and Mikee Goodman provide more than just a good-cop/bad-cop style, like most dual vocalists. While they both provide a take on singing and screaming, they both have their own style. While you hear Goodman's more "Anders Friden doing a Mike Patton" take on cleans on Flogging The Horses, accompanied by Hill's more traditional hardcore screams, or the more death metal influenced vocal delivery Hill performs on Another Sinking Ship with Goodman's odd screaming accompaning it. the trade-off is never one singer on a single track, as both make their presence known on every track. Both vocalists take a cleaner approach to the singing on In This Light and When The Moment's Gone, but it seems as though it is Hill's vocals that provide most of the cleans for the former while Goodman provides a lot of the harmonies and back-ups, the roles are reversed on the latter track.
Most of "Death..." has an almost spastic approach to it's sound, but tracks like the already mentioned In This Light, features an inclusion of an almost post-rock style early on before moving into the metal aspect of the band's sound. As the album progresses, more of these moments do appear, like on the progressive craft-work of When The Moment's Gone. There are a lot of melodic parts scattered throughout this almost "mathy" sound, seen on sections of Sanguine Seas of Bigotry or Way Beyond The Fond Old River.
Fans of progressive metal might have trouble getting into the band, Sikth, in general because of their, almost jittery sound. While many people will see the beauty in the melodic side of the band and the darker and more aggressive and technical aspect to the band, there will always be those who don't see why a band would make a sound so "noncommercial appealing." But within the frantic sound of "Death..." are moments of commercial accessibility and catchiness.
Overall, a great sounding record with a lot to hear and like about. People who don't like music that's dumbed down for the mainstream will find a lot to fall in love with. If you like music played by people who can play their instruments and don't show off a lot, you will find this record irresistible.
Overall Score: 8.5
Highlights: Bland Street Bloom, Way Beyond The Fond Old River, In This Light, Part of The Friction, Where Do We Fall?, As The Earth Spins Round
Posted by maskofgojira at 2:45 PM