Eluveitie - Everything Remains As It Never Was 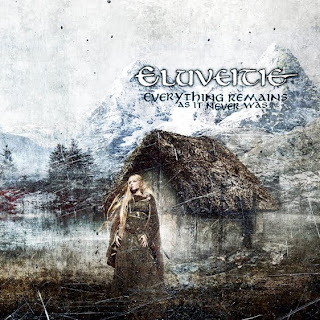 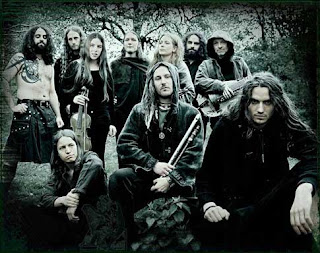 We Must Save The Motherland.

Eluveitie is a folk metal band from Switzerland. Unlike most folk metal bands though, Eluveitie combines more traditional folk instruments and melodies together with melodic death metal. One of the few bands doing this style, they have a different take on folk mixed with melo-death than a band like Ensiferum.
The band's take on melodic death metal and folk, as already mentioned above combines folk melodies with screamed vocals and heavy instrumentation. While guitars, bass and drums provide the metal aspects by providing the heaviness to the band's sound, the more traditional folk instruments give the band a more unique sound. Instruments like the hurdy gurdy, bagpipes, violins, and pipes and whistles are all used in to create an atmosphere that brings one back to the times of old.
The heavier elements of the band are not overly heavy sounding, being fairly standard riffing and drumming. More simplistic riffs and grooves are used more as a backdrop to the vocals and the melodies provided by the other instruments. While not mind blowing, they create a heavier sound that appeals to a wider audience of people due to it's take on the style. Though there are certain songs where the guitars are much more mixed in with the overall band's sound, and these are the songs that sound the best, examples being Lugdunon or (Do)minion.
The more traditional elements of the band are what make this band more unique though. While these are used for more melodic and catchy hooks in the band's sound, they also provide a very large sound. When listening to a single song, at some points it can sound crowded due to all of the instrumentation going on within a given track. But these instruments add a very old sound and vibe to the band.
The vocals are quite different when approaching a folk metal band. As already stated, again, one of the few bands who did this sort of approach to folk metal before Eluveitie was Ensiferum, but they mixed more black metal elements with their music, where as Eluveitie mixes more death metal. The main vocal style is a semi-death growl, this style makes the vocals very clear sounding and understandable to the average listener, but a few more tricks are utilized in the band's sound. Besides Chrigel Glanzmann, the main guy in this band and the performer of vocals and most of the odd folk instruments, like the mandola, bodhran, gaita, or several flutes and whistles, many of the other members of the band contribute to vocals as well. On the title-track, Everything Remains As It Never Was, female vocals are utilized in the chorus while on The Essence of Ashes has elements of various members singing along with Chrigel.
On this album, there are probably more interludes than many other bands would use, but they work in Eluveitie's favor. On instrumental interludes, the more traditional folk sound of the band comes out, on tracks like Isara or Setlon. These tracks remain mostly acoustic and without vocals, but explore a more traditional sound to the band's sound.
One track that stands out among the rest is Qouth The Raven. This track contains a sound similar to that of a more recent Dark Tranquillity song, containing clean female vocals during the chorus and more melodic and catchy riffs with a strong violin in the background. This track stands out for it's more modern and more metal based sound.
Overall, this is a strong album with some great melodic hooks. Any fan of melodic metal will find this is a welcome addition to their collection. While nothing on here is entirely mind-blowing, there are several track that are well performed and make this band stand out among all the other folk metal bands.
Overall Score: 8
Highlights: Thousandfold, Nil, The Essence of Ashes, Kingdom Come Undone, Quoth The Raven, (Do)minion, Lugdunon
Posted by maskofgojira at 9:32 AM