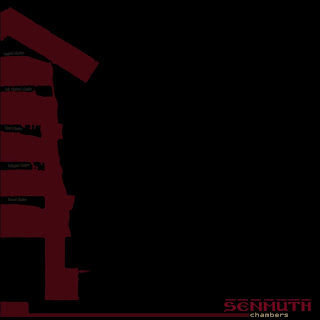 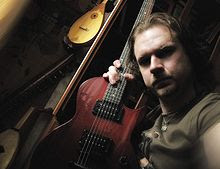 Egyptian Tombs Industrialized.
Senmuth is a Russian musician who many are probably unfamiliar with. His work under this name began in 2004, and he has already released over 50 albums of ranging musical styles. "Chambers" is the first album he has released this year and it has kept with his more recent ventures into ethnoambient territories.
Senmuth has released albums that range from the enthnoambient sounds found on this album to more doom and industrial metal or EBM and pure industrial music. "Chambers" explores more or the ambient styles that he has gotten into in the last few releases. Though under the ethnoambient title, it still has plenty of the signature industrial elements he has used in the past.
Senmuth is skilled in playing many foreign instruments, adding to the sound of more Egyptian that his releases have all focuses upon. From sitars or dutars to Jew's harps and pan-flutes are utilized in his recordings. Though the use of samplers and electric guitars also make appearance on other albums.
"Chambers" starts off with the very foreign sounding Davinson's Chamber which acts more as an opener than really any of the other songs. Even though it is about 7:25, it never drags on as most might assume. The whole album is like this, even though songs are long, they never appear to move as slowly as one might think.
Wellington's Chamber features a sound akin to that of a movie soundtrack. Featuring very orchestral backdrop to more flutes and woodwind instruments with an industrialized beat. Though sounding very different in the description, it is far from boring, bordering on the vibe of a Death March from Star Wars type of beats.
Nelson's Chamber features a sound much more akin to a normal ambient kind of track. This track has little electronics that appear and disappear in and out of the sound picture. Though this track still has the ethnic instruments of flutes and more basic kinds of percussion, the overall sound is much quieter than the last two tracks. It isn't until about half way through the song that more sounds come in to make the track louder sounding. But an openness is consistent throughout the track.
Guitars make their way into the background of the fourth track, Lady Arbuthnot's Chamber. The track still maintains that same ethnic sound as the previous tracks, but the vibe of this track brings to mind the atmosphere of an Opeth song or something from "Perdition City" era Ulver because of a more, almost progressive, way of arranging this track separates it from the others. Having a song length that is over 12 minutes is also to be mentioned for having those more spacey prog parts integrated with more ethno-Arabian-ambient music. As nothing like this track has come out of music, that I've heard, yet.
The final track, Campbell's Chamber, returns to the more straightforward ambient approach. Like every other track, it has those industrial touches on the rhythmic patterns and the more Arabian soundscapes, but this track seems more focused on giving you an actual conclusion to a journey more than a song. While some might complain about this track bringing nothing new after the longer epics the preceded it, this track does add more textures than any of the previous tracks.
This album might be a little less exciting than Senmuth's more metal and electronic records, but it does have the parts that grab your attention. Not an album for everyone, but is certainly worth a chance. As already stated, it does have to little bits of prog integrated into some songs, but it's more for the entire soundscape and vibe you get from hearing these tracks that this is worth listening to at least once.
Overall Score: 7.5
Highlights: Wellington's Chamber, Lady Arbuthnot's Chamber, Campbell's Chamber
Posted by maskofgojira at 1:35 PM