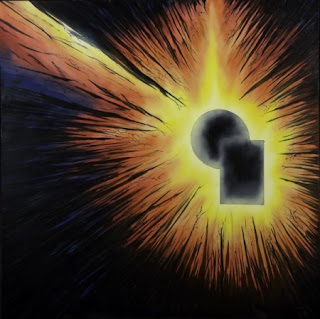 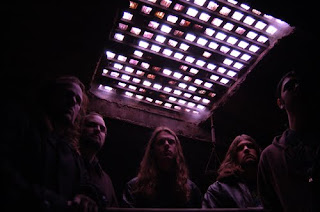 Martriden is a melodic black metal band from Montana. "Encounter The Monolith" is their second album, following up the promising "The Unsettling Dark." This new album improves upon everything on that debut record and expands upon it with near razor precision at song-writing.
As already stated, "Encounter The Monolith" expands upon the sound of the debut. These changes have moved the band into more progressive and technical territory, combined with their melodic style. While the previous record contained 10 songs, this record only contains 6 tracks, with many surpassing 5 minutes in length.
Opener, The Three Metamorphoses, starts things off with a bang. Starting fast and powerful and sounding like it was modeled after Emperor and Opeth. This track is most definitely an extreme metal song that moves through melodic black metal riffs as well as melancholic clean guitar parts that create an ebb and flow vibe to the song. Though this track exceeds 8 minutes, it doesn't feel that long, the band showcases some good song-writing abilities by focusing the overall sound on melodic and catchy riffs and fast drumming patterns while the vocals remain in the black metal vain. The guitars mainly stay within the black metal realm throughout most of the song, but moves into a bit of death metal during it's later moments. The final lines in the song are are the most melodic on the track, and acts as a small moment to breathe before the next track.
Heywood R. Floyd is a monster of a track, being rooted within more of a technical death metal sound more than black metal. This track exhibits more of a groove over melody, changing the pace. The bass is especially prominent in this track, displaying a similar style to Jeroen Paul Thesseling from Obscura. As the track progresses, it gradually becomes more and more of a progressive track, the use of keyboards to enhance the overall vibe of the track, giving it an epic feel. Guitar solos are littered throughout this track and bring that Opethian approach to this song. The drums are also especially creative throughout, using a lot of fills and different patterns to make the song less repetitive, while also adding to that progressive atmosphere.
Discovery is a track that brings more of a traditional sounding black metal approach to the table. The overall vibe from this song bring to mind the new Dark Fortress record, having a very catchy and accessible riff while still remains very technical and melodic. The melody on this track is undeniable and will instantly latch into your head. Nothing new is really demonstrated on this track that differs too much from the first 2 songs, but is still a good listen.
The fourth track, Human Error, follows a similar style to the previous, being less exploitative while demonstrating a different style. This track has a style that has much more in common with technical death metal more than the black metal style of the last track. This track does feature some cool atmospheric keyboards in the background. Being the shortest track on the album, it demonstrates that Martriden can write shorter, almost traditional songs while still showing a unique take on something old.
The title-track is the follows next. This track is much more of an epic and atmospheric type of death metal song. Being a little slower than previous tracks allows the track a little more breathing room for the atmosphere to enhance the overall feel of the song. Clean vocals are first demonstrated on this song. Some more progressive phases come in and out of the song, making this track a particular highlight on this record. This track stands out among the rest due to it's overall slower and melancholic atmosphere, something that the band has not attempted on a song yet.
The final track is the 10 minute epic, Death and Transfiguration. This track shows a definitive reference to Opeth's sound as well as elements of Katatonia and Agalloch are experimented with on this track. The atmosphere blends well with the dark sound of the guitars and the more poly-rhythmic drumming patterns. The keyboards even seem to explore a bit of the 70's mellotron that Opeth has used so much in their sound. The use of more clean guitars come in about half way through the track, bringing in the Katatonia and Agalloch touches to the sound. Being very solemn and doomy without moving into doom territory, they are able to express a lot in this beautiful section before moving back into more epic metal sections. Although exploring a lot within this song, it is an instrumental track, showcasing the talent of these musicians.
Overall, this record has really impressed me a lot. Coming from a band that put out a solid debut record, that although was good, didn't really show anything new, and coming back only two years later with something fresh and unique sounding. While this record isn't entirely a new style, it is the best I've heard a band move forward within one record to another and develop their sound so fully. This record is one that people should hear, this band will appeal to fans of any of the band's mentioned above.
Overall Score: 9.5
Highlights: Every track is a highlight
Posted by maskofgojira at 9:33 PM