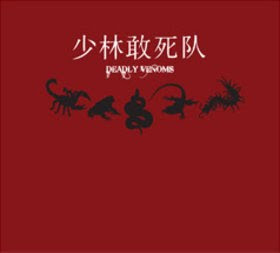 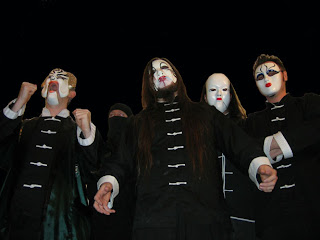 Ninja Warriors Decend Like Night (And Leave Just As Quickly).

Shaolin Death Squad is a progressive metal band from Texas. Though from Texas, their songs focus more on oriental themes. "Five Deadly Venoms" is their second release and demonstrates improved song-writing abilities.
Opposing their debut, this new record features much less extreme metal influences, sounding much more like traditional metal and prog-metal bands. Opener Centipede sounds very much like an old Queensryche or Fates Warning song. Though traces of more extreme music are still found frequently, they are not as much fused to the band's sound as it was on their debut.
Songs on this new record also show much more consice song-writing abilities. On their debut record, songs moved into the 7 and 8 minute territories, though never boring, the band seems to have focused more on consice song structures. Songs on "Five Deadly Venoms" are short and sweet, with only Snake moving into 6 minutes. But with shorter songs also creates more memorable hooks, that's not always true, but rings true here with songs like having soaring choruses.
Even with shorter songs, the band still manages to explore multiple territories within songs. While the opening track, Romanza is just a more or less ambient folkish track that leads into Centipede, a song that is pure metal and just ozzes influence from Queensryche and Fates Warning. Scorpion on the other hand brings a more jazz-fusion influence to the more classic Iron Maiden styled song with more dissonant riffs coming into the picture along with a more death metal influenced guitar sound. Lizard comes off as a more old-school, Metallica styled, technical thrash metal song but moves into an almost funk rhythm during it's bridge.
The main influences in this band are more old-school heavy metal and prog-metal bands for sure, but newer influences still make their way in to the band's sound. Toad sounds like a song from Porcupine Tree or Riverside for example. These influences appear throughout the album with others.
The centerpieces of the album are Centipede, Snake, Scorpion, Lizard, and Toad. These tracks flow together in a rather unique way, all of them express the idea of "Five Deadly Venoms" but don't focus on it directly, using them more as personality traits more than anything. After these tracks, the album moves into more obscure directions.
With following tracks sounding very much akin to that of a Mr. Bungle-esque track. Bringing in sounds and influences that bring more movie score and soundtrack vibes to the songs. Especially on the instrumental tracks Mischief and Epiphany and Peace Be Upon You.
Overall, this record is a great new record for fans of progressive metal, both old and new. While the influences of this band are most definitely old and bring the band an old-school sound, the band still sounds very fresh and modern sounding. Definetly worth checking out and highly recommended.
Overall Score: 9
Highlights: Centipede, Scorpion, Lizard, Toad, Let Us Welcome The Actors, Farewell
Posted by maskofgojira at 10:15 PM