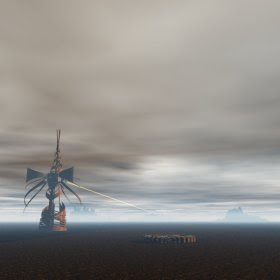 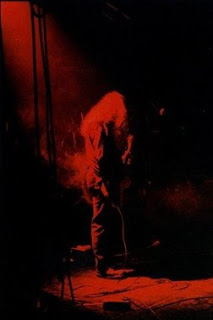 A Slow and Painful Death.

Beyond Black Void is the funeral doom/drone project by Belgium doom-maker Stijn van Cauter. This project holds only 3 songs, but is over an hour long. Anyone looking to hear some slow and brooding doom metal, look no further.
As already stated, this is just a project. "Desolate" was the only record ever released by this project, as Stijn has about 15 other projects going on right now, most of them in the doom/drone areas. Though many people will find this project to be similar, if not the same, in style to almost every one of his other projects, BBV does have some more "accessible" moments to it.
Again, there are only 3 tracks on this album. Having the number of tracks that it has and being over an hour means that every song on here is over 10 minutes long. One song reaches over and drags itself along for over half and hour. If this appeals to you, read further.
The first track, Desolate, starts with a very slow and melancholic guitar melody that echoes around for a while and carries on for about 3 minutes. Once you get into that 3 minute mark, the bass comes crushing in, and I mean crushing. The way this bass is used isn't so much to create a groove as much as it just comes in on top of everything else and creates a giant drone. Once in a while vocals come in. Not that that says much, because the vocals are both below the sound of a droning bass and are more like gurgles anyway, so you can't even understand them. Around 12 minutes, the droning guitar fades, leaving the "lead" guitar to echo on it's melody for a while longer. Around the 17 minute mark the drone comes back in, booming as ever. That drone lasts for several more minutes before, once again, fading around 21 minutes. The melody then carries on for the rest of the song before a final crash at the 23 minute mark.
At this point in the review, many, who are reading this, are probably wondering what that "accessibility" I mentioned before was from. That "accessibility" is used both loosely and lightly, because that which could make people listen to this is the melody/lead guitar that carries along a slow, but melodic sense to it. While this obviously will not please everyone, those who enjoy this type of droning music will find it interesting.
The second song, Storm Over Jupiter, is over 30 minutes long. This song picks up right where the previous one left off, with a melody coming in slowly and a droning bass following the main melody line. Though nothing new has been introduced into this song, musically, this track feels much more interesting and enjoyable than the first. Instrumentally, Stijn introduces a timpani to the sound. This adds to the trance-like state the music can bring you into.
The final track is EverVoid. This track is almost 15 minutes, and is the shortest track on the album. This track is a little more like the opener for the album, it's mostly a droning bass over a melodic guitar line, this track really doesn't sound too different from the opener due to this. The melody, of course, is different, but it doesn't quite live up to the previous track's monolithic stature.
Overall, I know a lot of people aren't going to get into this record due to the volume of the track lengths or the style itself, but that doesn't mean you should ignore it. Give this, or one of Stijn's other projects a listen and see if you like anything there. But for this record in particular, if you like big, droning, minimalistic metal, this is a thumbs up.
Overall Score: 6.5
Highlights: Storm Over Jupiter

http://nulll-void.com/nulll/
Posted by maskofgojira at 12:30 PM