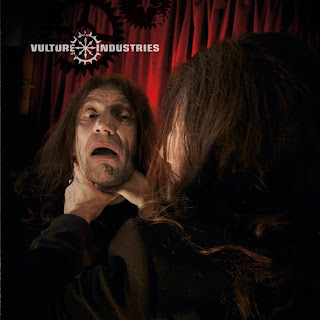 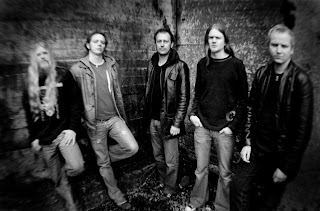 Fans of Arcturus? I Think Maybe.

Vulture Industries is an avant-garde metal band from Norway. Many consider them to be the successors to the style Arcturus had founded. Continuing in their footsteps can be obviously seen, but they have a more extreme side of them.
Vulture Industries does have a lot in common with Arcturus. The avant-garde parts of the music do give it a tone similar to what would be a bridge between Arcturus' "La Masquerade Infernale" and "The Sham Mirrors." Another comparison is vocalist Bjornar Nilsen and the first vocalist of Arcturus, Garm. They both have a similar approach to their vocals and both use a more baritone range for their singing.
But as already stated, Vulture Industries is more extreme sounding compared to Arcturus. The guitars feature a more prominent place in the overall sound of the band. While the latter band used more keyboards and pianos for the basis of their sound. The overall tone is also a bit more easier to digest due to less avant-garde, left-field moments in the sound.
The overall sound of the band is very metal. While those doses of progressive and avant-garde do have quite a large part in the band's sound, they do not consume this the sound. Heavy and technical riffs and weird drumming patterns make up the musical background.
Riffs wander from traditional black metal tremolo picking to more progressive melodies. This makes things a little more tolerable to listen to more than constant barrage of avant-garde heaviness. But the touches of avant-garde a mainly bought in by the use by Bjornar's keyboard and programming on the album. Another thing that brings in these touches is the guest appearances of a cello and viola player on the album, when these back up the guitars, they bring an almost sorrowful melody to the song, namely The Benevolent Pawn.
The bass is pretty standard for metal. It mainly sticks behind the guitars providing a low end, but it does come out and make appearances in the front of the sound once in a while. Grim Apparitions is a track that showcases this the best due to the bass, drums, and keyboards coming out at the very beginning of the song. The bass is still very audible in the sound though, without listening very hard, you can hear the bass rumbling in the behind the guitars.
But again, as stated before, vocalist Bjornar has a similar style to Garm. But he performs more extreme vocals on this album than Garm has done in recent years. Whether it's the death growls on opener Pills of Conformity or more black metal rasps on A Path of Infamy he has a range that is larger than most. His primary style of choice though is a more baritone clean style which borders on laughable crooning and whimsical meandering.
Overall, this is a band still finding their sound, but has a greater chance of finding one that is unique to them more so than other bands. The sound on this record is very enticing and is both catchy and odd at the same time. Definitely a band to watch out for.
Overall Score: 9.5
Highlights: Every song is a highlight
Posted by maskofgojira at 11:31 AM