Node - In The End Everything Is A Gag 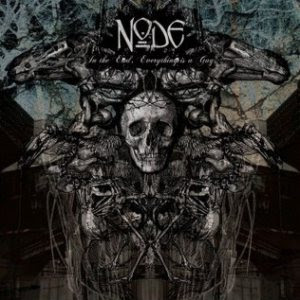 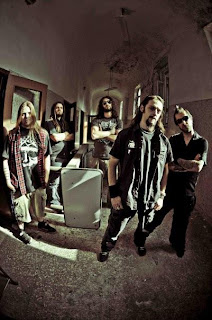 Sometimes The Easy Way Is to Just Leave.

Node is an Italian technical death metal band. Having been formed over 15 years ago and suffered numerous line-up changes, this new record contains some of their finest moments to date. Testament styled trash meets Children of Bodom melodic sensibilities and Pestilence technical prowess.
As already stated, the music has a very old-school feel to it, not being incredibly brutal or technical when compared to newer bands. This might turn off some people who are into bands like The Faceless or Beneath The Massacre from checking these guys out, but if you like those bands, this band is still worth your time. The technicality of Node is not dizzying riffs played at hyper-speed, brutal breakdowns, or technical wankery solos, as much as it is fitting cool sounding riffs into a song. This means that even if these guys aren't the most technical band out there, they can still write catchy songs and riffs that blow most of these newer bands away.
A lot of the songs on this record focus more on a groove more than a super fast thrash or death metal riffs or trying to be uber technical. Songs like New Order and Mia Follow Me Down feature some grooves that many will label these guys as a nu-metal or groove metal band, and neither of those is really accurate descriptions. Node explores much more territory than bands in those genres usually do, plus they actually have riffs.
There are quite a few songs that feature some more dissonant parts. The Masks of Life features a Dillinger Escape Plan-like part before it's solo. While this is not the most enticing or original thing ever, it mixes things up a little bit.
Lyrically, Node has more in common with a band like Strapping Young Lad. This comes from the lyrics being socially conscious but still having a sense of humor. The opening track 100% Hate shows a sense of humor by poking fun at society, hookers, etc. without sounding cheesy.
There is a cover on this album of Billy Idol's Rebel Yell. This is actually a decent cover song, and it also shows that the band is willing to show influences outside of metal. Besides being a cool song, it sounds almost like a copy of the cover that COB did of the song, both vocally and musically. This could be both a good or a bad thing depending on how you view that band.
The closing track, In Death You Live, could be considered the ballad of the album. Most of the song is acoustically driven with spoken vocals, but moves into a more thrash riffs during the chorus. It also features one of those epic guitar solos that is usually found in a ballad as well. Besides closing the song on a rather different note, compared to the rest of the album, it is a decent song.
Vocally, nothing on this album is overly low or high sounding. The vocals contain a heavy yelling style that has more in common with hardcore and thrash metal, or even early death metal. Occasionally he will move into a style that sounds like Alexi from COB, but he doesn't vary his style more than that. In a song like The White Is Burning, some spoken word parts come in the middle of the song, and This Ocean and All My Faults features some higher cleaner singing.
Overall, this is a good record, not mind-blowing, but worth hearing. Many people will probably decide that this is not technical enough or doesn't feature enough breakdowns, but fans of both those things should still check this record out. This record features some major hooks and is one that will have parts stuck in your head.
Overall Score: 7.5
Highlights: The White Is Burning, When I Believed In God, New Order, All My Faults, In Death You Live
Posted by maskofgojira at 11:21 PM