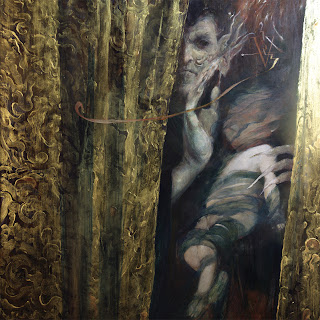 Last year I wrote up a review for Venus Star's album Setyphorus which I thought was pretty solid. Frankly, in the pantheon of projects and releases that Atvar is and has been a part of, Venus Star hasn't been my favorite but it's still good. So with no big releases from some of his other projects in sight at the time of me writing this, I was able to focus on this album a bit more.
Sonically, Venus Star has always been more about brute force than experimentation or uniqueness. The other releases I have heard from the project have found homes in the blackened death and doom/death genres rather than the black metal ones that Atvar typically associates himself with. This isn't bad though, because everyone needs a change of pace, and certainly Atvar is deserving of this, and it's obvious whenever I listen to a release from this project that he is trying to get away from the sounds of his other bands. This album is all about being direct and brutal, with the exception of the closer, no other song on here crosses the four minute mark, so these songs do what they need to and then finish up. That, in a way is both this album's strength and its weakness. When it comes to songs like Dark Feathers or Extrance, the reason they work is because they are short and efficient with their time. They don't stay around long enough for you to grow sick and tired of them and they also deliver some solid riffs and choruses - the ladder being the most surprising. When it's a weakness, it is because some songs are so short it feels as though they don't really accomplish all that much. They just sort of end without giving you anything to hold onto.
While I never felt as though the ladder caused me too much trouble, I wish some tracks did a little bit more, I could deal with it. The biggest problem on here, if you could call it a problem, was the change in tone during a couple of tracks in the middle of the album. This is a raw album, and it's a very bassy album. There's no polish on here and that's fine, when atmosphere is needed I assume that it is either naturally caused by a riff or through the addition of subtle keyboard tones, but in the middle of the album the production suddenly appears to clean up a little bit. The guitar tone is different, keyboards are more present, or at least a lot more noticeable, and the production is just a little bit cleaner. It sounds like it belongs to a completely different recording. The songs aren't bad, I just don't get the shift in production tone.
Sometimes I don't need anything beyond brutality, especially if the album is short like this one is. It's interesting to see the rate at which this project has actually released material recently - one full-length and three EPs were released last year, so I'm assuming that this is not the last time we will hear from this project this year. With the exception of the production shift in the middle of the album, I think this is a pretty solid album that should definitely please fans of rawer death and doom metal.
Overall Score: 7.5
Highlights: Dark Feathers, New Aeon Comes, Daggers
Posted by maskofgojira at 1:40 PM