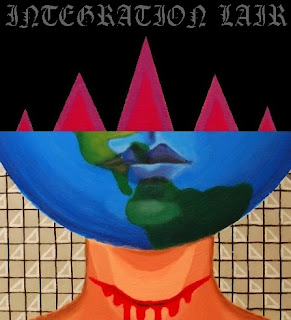 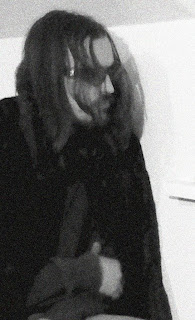 I am in no way familiar with the work of Edasi, I hadn't even heard of this album until I was messaged about it. I have a page where I keep a list (some of you know it) of everything I review and that's where he messaged me. I was sort of curious based on the cover art and genres that were associated on the site so I decided to give it a go.
Almost immediately after I pressed play on the bandcamp player for this album I knew I would be in for something... let's say special. Blackened noise and dark ambient music aren't foreign genres to each other, hell band's have been fusing them together (more or less) since the mid-90s, and avant-garde jazz thrown into the loop is something that a group like Locrian has been doing for several years at this point through the addition of Steven Hess behind the drumkit. So sonically, I assumed, before listening to this album, that I had a vague idea of what this would sound like. By the time I got through half the album I still wasn't sure what this was, but it certainly wasn't what the genre descriptions I had seen had told me it was. It was black metal in the sense that someone was screaming, it was noise in the sense that there was a lot of feedback and distortion, it was avant-garde if playing drums, I'm assuming, improvisationally is, but I will give it to the project that it can do ambient. Aside from that this was a whole load a stuff that didn't quite do anything or fit into any genre, for better or worse.
I'm all for originality, I love groups that break conventions and are weird and bizarre, but I hate it when it just sounds like a band or project is trying to be weird for the sake of it. Honestly, I was fed up with this album by the third track. I finished listening to the entire thing, I wouldn't review an album after listening to only a few tracks, but I had already made up my mind about how I had felt about it. That's probably a bad thing to say because it make it sound like I didn't give this thing a chance, which is fair criticism, but I finished the album. If a track was going to impress me, it would have; and yes, I only listened to this thing once through. This just sounded like a whole lot of random crap put together in order to make it sound strange and unique. I read the little description at the bottom of the page that said that one of the guys involved had played in a prog-rock group for years before doing this project and had said that this project changed his approach to music. Well in my opinion he should go back because this is really bad. There are plenty of artists who can make this sort of sound collage-ish style work but this isn't one of them.
Even if it's just a little aspect of a track, there's something in almost every single song on here that annoys me. The plucking of strings on Advice of Gnomes (Maintained Wisdom) was irritating beyond belief, the harsh tone on the cymbals as a result of the feedback on We Gather Stones, and the various stupid sound effects added throughout White Beauty, which otherwise could have been a decent ambient track, and that's just a few. There are a few pieces that were solid on here though, the opener, Appearance, and Skywalker are two tracks that were decently well done didn't annoy the living hell out of me. But two out of ten isn't good in my book. I'm all for trying to stand out and do something unique, but please, do something that is actually listenable.
So yeah, this was just a massive headache of an album that I cannot recommend to anyone. Fans of of noise, avant-garde music, and perhaps ambient music might be able to get into it, give it a shot, but I certainly don't advise it. This is a mess of a release and I think the people that made it should take some time and remember, or learn, how to construct a piece of music that isn't a mess of sound.
Overall Score: 3
Highlights: Appearance, Skywalker
Posted by maskofgojira at 7:10 PM