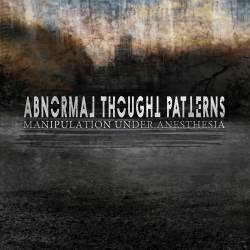 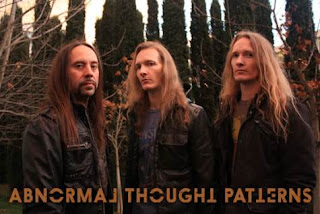 Two years ago a little instrumental group called Abnormal Thought Patterns put out a solid shrederiffic EP. I thought it was pretty good, if not totally engrossing, release that showed some promise. Now there's a full-length, with the band taking pretty much the same approach as that EP.
My main problem with records like this is simply, sure it's all well and good that you can shred and you have found a band who is actually willing to play to the side in order to have a lead guitarist just wank away on his guitar, but where are the songs? Yes, in this band, since the main guitarist and the bassist are brother, they can both show off their chops, but even then this record still conforms to the lack of actual songs - not on the entire thing mind you, but for enough where it was able to annoy me. Because three-fourths of this band belonged to the great prog-metal band Zero Hour I know that they can play, and it has to be said that this record does take the time to actually just bulldoze the listener with riffs, but there are many instances where actual riffs sound like mini-solos being repeated (you decide if that's a plus or minus in your books). Don't get me wrong, I don't have a huge problem with this record, or at least in comparison with many other instrumental shred records anyway, but I still could have used more songs and less wank.
Since that first paragraph was so pessimistic, I figure I should try and shine at least a little bit of light and positivity on here because like I said, it isn't a bad record. There are pieces on here that come together better than others and feel more coherent and structured than the simple, shred-shred-pause-shred style that the majority of the record goes for. Velocity and Acceleration Movement VII is probably the most well put together track in the entire collection of songs so far released. It's also worth noting that when the band take a break from the shred-metal and break into more of a jazz fusion section, it really works in their favor. Not only does it feel far less show-off-ish(?) but it comes across as more grabbing.
So yeah, obviously this is not the sort of record that is going to be for everyone. This is mainly for those people who enjoy good musicians and like technical playing with lots of solos and technicality. It is what it is and I accept it for that, it has it's strong and weak points, if you can't deal with that, than this record isn't for you.
Overall Score: 7
Highlights: Velocity and Acceleration Movement VII, Autumn, Electric Sun 2.0
Posted by maskofgojira at 3:18 PM