The Meads of Asphodel - Sonderkommando (2013) 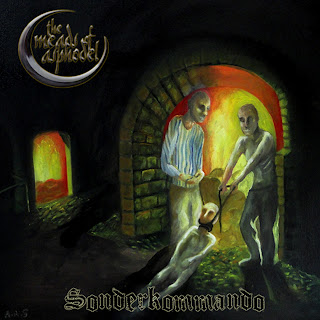 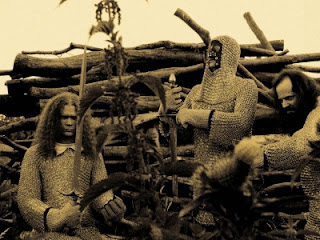 What can one say to start of a review for the UK's most well-known chainmail wearing extreme metalists? Despite my general good will towards the band, I've often found that I have a hard time enjoying their full-lengths as a whole album. I came into this with an open mind, as always, hoping that this one would prove to be the album that would work entirely for me.
In the past, I have found the EPs and splits that The Meads of Asphodel have released and been a part of to be more consistent in material than their full-lengths. That's more of less going to be because there is less material, but for me it has also had to do with the band not spreading themselves too thin. On past full-lengths that I've listened to, it hasn't been so much that the material has been bad, it's been more that some songs are really good, while a majority of others are either only just ok or just uninteresting. I don't understand the band's fascination with narrative tracks, whether they're doing a concept album or not, they seem to be an ever-present part of the band's sound. Frankly, I've said it before for other groups that do it, I'd rather let the music speak for itself rather than have someone tell me exactly what is going on. If you're going to do that, sing/scream/growl/etc. to me instead. Though I do have to say that the first half of Lamenting Weaver of Horror is down right hilarious.
When discussing the actual songs on here though, I have to admit that even I was surprised by how consistent this album was. The opening title-track, despite it's rather cheesy chorus, it extremely catchy and progressive. It does a little bit of everything the band have become known for, traditional black metal aggression, a driving punk groove, the occasional power metal vocal part, and some nice acoustic playing. For me, it was everything that I expect the band to sound like. The following handful of tracks continue in spectacular fashion, with the punky Wishing Well of Bones, the black metal-meets-psyche rock Silent Ghosts of Babi Yar, and the epic progressive-ness of both parts of Children of The Sunwheel Banner. These are tracks that show the band at what is arguably their best. I often wonder why the band just can't continue writing songs that keep in the same vein as tracks like these which are diverse, fun, and exciting to listen to and while there aren't too many songs on here that are just forgettable, they are there. I can get behind what the band is doing but the tracks that are just forgettable just drag the album down from being otherwise quite good.
But as the album progresses, the band begins to trip over itself again. Sins of The Pharaohs is a perfectly solid song, but it's overextended and feels longer than it needs to be, Last Train to Eden falls into psychedelia that sounds more like a mess than an actual well-constructed part. It's a shame because the first half of the album is so well constructed and fun to listen to that because the second half just sounds like a mess in more than a couple of spots it makes listening to this portion of the album a drag.
I wish I liked this album more, but I can't ignore the problems with the second half of this album. I'd definitely say that if you like your black metal weird, listen to the first half of this album because those first handful of tracks are really, really good. But aside from that, listen at your own discretion.
Overall Score: 7.5
Highlights: Sonderkommando, Children of The Sunwheel Banner II, Hourglass of Ash
Posted by maskofgojira at 3:30 PM