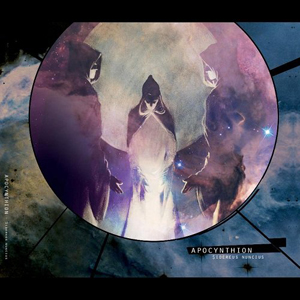 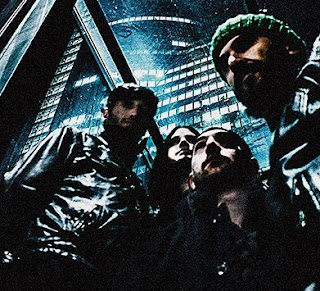 About a year or so ago I was skimming through bandcamp and looking at different groups and projects that just happened to look interesting (in terms of cover art work) and stumbled across a song by the group Apocynthion. I was very interested in the progress of a upcoming album that the band would/was working on at the time because that song was impressive, to say the least. Now, some time later I just happened upon this album and was definitely going to get down and cover it as soon as I could.
To be fair, stylistically, this band is not totally dissimilar to many other post-black metal bands out there, you have post-rock sections and the black metal ones as well. If you've heard groups like Lantlôs or Fen, you know the general sound on here. So really the only difference I could offer those who feel like this isn't anything special is that the songwriting is slightly more interesting than the typical group ripping off ideas from groups like the aforementioned two above. Granted, songwriting is somewhat relative to this situation because the majority of "songs" (excluding interludes and intros/outros) tend to drift more around the ten minute mark on this album, the band keep a pretty consistent and even pace to the album throughout while giving each song at least one thing that will allow the listener to latch onto a piece that long. It has to be said that despite the actual lengths of the songs, the band don't lean too far into the "progressive" genres and stick more towards a doom-esque melodic side (though not actually doom).
While the band tend to stick to the dynamic established by many other groups (mellow/harsh - going back and forth between the two) one of the things that particularly stuck out to me was how well the clean vocals fit in with the band. More often than not in bands of this style, vocals almost seem irrelevant, not in the sense that the music doesn't need them but more that if a band uses vocals they use almost no thought of how they should actually be used. There are dozens are carbon copies of the aforementioned groups above who just do the instrumental thing, which is fine, but is very hard to establish a sound that is your own. Then there are bands who do use vocals and that is where most people's ear will naturally gravitate towards. Some bands manage to work out a way for the vocals to remain consistent in either style while others just tack in on like it just needs to be there. In the case of this band, the vocals fit the tone of the music, in both clean and aggressive styles, which is something that definitely worked out in their favor at least in my opinion while listening to this. The clean vocals are sort of monotone while the screams feel grossly exaggerated, but it works well within the context of the sound the band created. The cleans don't need to be really varied to fit in with the melancholic and moody tone of the instrumentals while the screams do what they need to when used and don't feel quite as forced as so many other bands tend to make them feel.
In the end I was rather impressed with how the band constructed their sound on here. While I do hope that future releases will see them expand and experiment with their sound more, for a debut this is solid and well crafted. Definitely check this out if you're a fan of more of the atmospheric and post-rock influenced side of black metal.
Overall Score: 7.5
Highlights: Nothing Important Happened Today I, MDSCC
Posted by maskofgojira at 2:53 PM