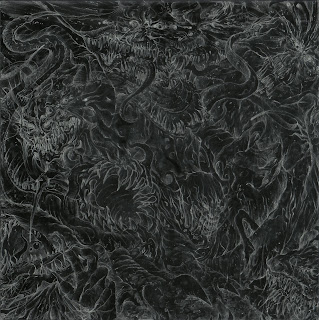 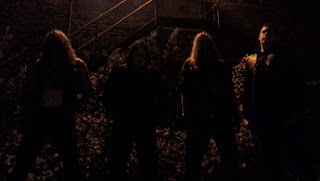 This is my first encounter with Beyond. For a modern death metal album, where album covers are meant to be "brutal" or "weird" or whatever, this one caught my attention because it was actually pretty simplistic and it wasn't pristine looking. Sometimes that's all it takes to get me interested in your album, and in this case, that was what did it.
After opening with actually interesting intro, Beyond actually jump straight into some blackened death metal riffing. I usually don't care for intros that much when it comes to death metal albums, albums in general really, but occasionally they are worthy of actually taking up space. While the spacey synths that open this album, Expressions, aren't particularly inventive (chances are you've heard this sort of intro on several albums of this sort before) they do at least set the mood for what follows about two minutes in when the actual track kicks in. I'm not gonna lie, Beyond play death metal, with quite a bit of black metal influence thrown in as well, but it's death metal at it's core and chances are you have heard many a band play the same style as these guys before. Now, that's not meant as a dis to the band in question, but it's a fact. If you've heard any number of bands that play death metal and aren't signed to a huge label like Metal Blade or Century Media, you'll have heard this more old-school death metal meets occasional black metal riffs and mounds of reverb before. But, as is always the case, there are bands that do play this style better than others, and I'm willing to say that Beyond are one of those bands.
I like to think that I'll find at least one album each year that will make me feel good for giving it a chance even if I'm not that ecstatic about the genre in question. As I've said many times before the whole sub-genre of "blackened death metal" is one that I'm not overly crazy for and I've covered a few bands that really show why I don't care for the genre that much. But I've found that there is usually at least one album to come from this sub-genre from a band I've likely never heard of before that makes me want to retain my faith in the genre. Beyond really capture that sound perfectly. Unlike many of the cavecore bands which just drown out their riffs in reverb til they sound like mud, Beyond actually keep their riffs at the forefront of their sound. I'll be honest, while not every riff is a winner, there are some on here that are great and really kick ass. In addition to that all the reverb that's used on the vocals and is placed in the background of the album actually works as something other than murky fog to make the band sound dark. There really isn't anything obstructing the guitars or vocals or drums or bass on here so the atmosphere in the background actually feels less like a crutch and more like an accessory. I also thought it was pretty cool how the band actually used synths to beef up some parts, hear the bridge of Fatal Power of Death; and sure, it may come across as a little bit cheesy but it works. It doesn't really distract from what came before the track but works in the context of that one section. The band also aren't afraid to branch out and hit you with a lot of ideas in one track either, Schizopsychotic Eruption is exactly what the title says, it's frenetic, jumping between black metal blasts, technical guitar interplay, and some more straight-forward thrash riffing. It's quick and gets the job done the way a good schizophrenic track should.
I was really impressed with this album, it's the sort of album I hope to find from the death metal genre each year. I only listened to this because I thought the cover was sort of cool but wound up finding a kickass band that really knows how to fuse death and black metal together while still retaining a sense of personality and not losing themselves in reverb. Definitely worth checking out if you're fans of death metal (of any sub-genre) because this is a pretty badass release that will hopefully knock you for a loop as much as it did me on my first listen through.
Overall Score: 8.5
Highlights: Whirlwinds, Fatal Power of Death, Consuming Black Void
Posted by maskofgojira at 10:26 AM