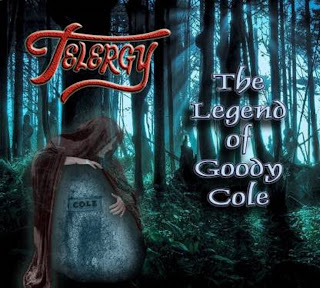 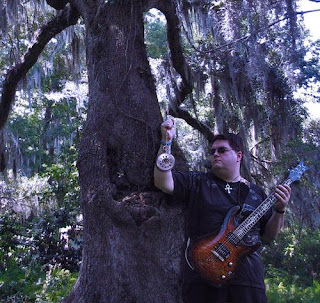 A couple of years ago, or so it seemed since it was actually only just over a year, I received an album to review by a project called Telergy. That project was based in the progressive rock genre (a genre I am certainly familiar with) and I was actually quite impressed with it, aside from some critiques. Now, just over a year later, I received this new full-length from the project (with what is possibly the worst looking cover I've seen all year).
Since it's one of the first things that appeared in my head while listening to this album I'll start with what was my main problem with this project's last album, the samples/spoken word/etc. parts. On the last album, there were tracks that were dedicated to the telling of a story (since the album was a concept) that I just found entirely pointless. Telling a story is great, but I don't need outros that were minutes long telling a story that the music itself should have already covered - because that album was, and this album is for the most part, instrumental. I can't say that that problem has been solved entirely on here, but it has at least been addressed to the point that it never proved to be a problem for me. Instead of long sections of plot exposition being told to you at the beginning or end of a long section of music, it's actually been put onto shorter tracks that usually range around the one minute mark. Frankly, I would have liked the music to carry the album by itself without any spoken word or vocals needed, but as it stands now, I have no qualms with it.
Apart from that, the project stays, relatively speaking, within the same area they did on their last full-length. So you're getting instrumental progressive rock/metal with some odes to classical and folk music. What struck me about the last album was that the project's blending of ideas was one that could definitely appeal to plenty of people who weren't into the newer batch of progressive bands (as in almost anything that came out since the 90s) but could still grab an audience of heavier fans. With this new album, it seems like the project has not only gotten heavier, or more metallic - whichever, but also more grandiose. The orchestrations on here feel darker, more intense, and more over-the-top. That, in a sense, might turn some people off because there is certainly a lot more of a shred vibe going on throughout the actual tracks. There's a lot more of a Dream Theater vibe coming off of these songs than I remember getting from the last album. Thus, tracks like Accusations or Verdict might turn away some of the band's more old-school prog fans due to how reliant they are on heavy and metallic sounding guitars and speedy runs up and down the fretboard. Meanwhile tracks like the gentle folk-rock of Voyage and escalating progressive epic, and album highlight, Ghost demonstrate a more restrained perspective that allows songwriting to feel a bit more natural and less like a shredfest. The more soulful guitar solo in the middle of the ladder track is easily the best on the entire album. Perhaps technically it isn't as impressive as the faster ones, but it feels a lot more emotional and is something I was more drawn to than the million notes a minute shredding that dominated the majority of other tracks.
In the end, it's a bit of a mixed bag for me. Improvements were definitely made from the last album and I can respect the need to shred, but my interest in that sort of stuff has waned as I've gotten older. The tracks that were a bit more soulful and less intense definitely turned out to be some of my favorites on the entire album. So if you're into progressive rock or metal, definitely take a listen to this - and just ignore the cover.
Overall Score: 7.5
Highlights: Accusations, Voyage, Ghost
Posted by maskofgojira at 12:16 PM