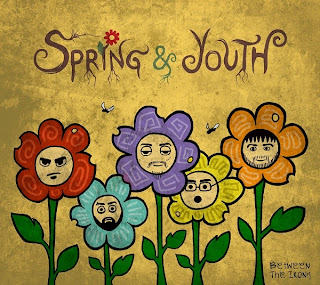 About a month back (at the time of this writing) I was emailed about covering this album, which obviously came out last year, which is something I am hesitant to do at this point in the year. I took a listen to their album and was actually quite surprised. So, I'm making an exception for this album.
Pretty much any band that labels or is labeled as "avant-garde metal" I check out solely on principal. It just so happens that that is where most of my favorite groups come from and they tend to be put inside such categories, so reading that these guys called themselves avant-garde did pique my interest. I think anyone calling themselves avant-garde is somewhat pretentious in a way (but then again, isn't the music itself somewhat based on how weird and off-beat it tries to be - in the case of some bands anyway), but regardless, the label still intrigues me enough to listen to almost any band being identified as such. Listening to this album, it certainly sounds as though the band are trying really hard to embrace influences from progressive and avant-garde groups. There's plenty of weirdness in here, with piano melodies taking the lead over distorted guitar chugs, warbling vocal lines that drift somewhere between the tonality of Garm and the manic nature of Mike Patton (though it has to be said with that the vocalist here isn't up to either's caliber - but then again, very few are), and jazzy breakdowns. It's fun, bizarre, and definitely not straightforward.
While I was listening to this though, all I could think about was how much it seemed more like a modern prog-rock album. Yes, it had some heavier leanings that definitely came from the metal genre, but it just never acquired that chunky tone that is usually found in metal music. Even with death growls and plenty of chugs on here, it just felt closer to progressive rock than progressive metal, but I digress. At times it feels as though they're taking the Arcturus approach of writing music that isn't that heavy, but is rooted in metal even though it takes just as many cues from jazz, progressive rock, and classical music. But in that also comes my main criticism, the band don't sound quite as natural as they should. I compliment the instrumentalists because they are clearly good musicians and their transitions from one section to another should be commended, but the vocalist here just feels too forced for his own good. It's as if he's purposefully trying to sound weird and strange, listen to his performance on Heavy, it just doesn't sound natural. I respect his effort, but perhaps he's trying a bit too hard for his own good. To be fair though, on the second half of the record he does appear to be more comfortable. At it's best it's like a more jazzy Arcturus or Vulture Industries, at it's worst though, it sounds like a bunch of guys who like to be as weird as possible - musically, I can't say personally. It's often more of the former, which is good, but it will be interesting to hear how these guys evolve.
While there are still several weak points of this group, I think this is a very admirable start to what is hopefully a very interesting career. These guys are talented and have a lot of cool ideas that I hope will translate to those who listen. If you're a fan of progressive, avant-garde, and jazzy metal/rock definitely give this a listen.
Overall Score: 8
Highlights: Feetless, Muriatic, Four and A Half
Posted by maskofgojira at 12:31 PM