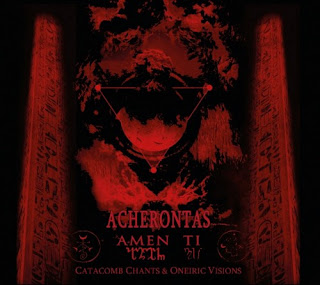 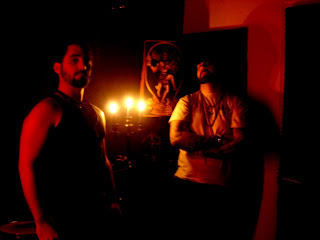 Since I covered Theosis back in 2010, I've been keeping tabs on what Acherontas has been releasing (though I have not covered any of it). When I listened to Vamachara in 2011, I didn't find much to be worth covering at that time but consciously tried to make time for this album this year. With some definite shifts in tone since both of those albums, this one definitely got my attention.
It has to be said right away, this album is too long. While I certainly admire the band's penchant for writing lengthy pieces that really do conjure up a nice and dark atmosphere, some tracks just go on for far too long. Because the length of most tracks is around the seven or eight minute mark, you can guarantee that you will get some good and some bad. Just knowing about the band's last two full-lengths did prepare me somewhat for what they were going for on here. It's always appeared to me that the band has tried to achieve a more ritualistic atmosphere in their music, whether in their more traditional black metal pieces or in straight-up ritual ambient, dark ambient, or drone pieces. Some work, some don't, but I can tell you that for a band that is primarily known for their black metal songs and for working on splits with other black metal groups, their interest in those other styles certainly comes out on their full-lengths, for better or worse.
From my point of view, while I do admire the dedication to one's craft enough to construct lengthy pieces like Nebt-Het - Divulgence of Ηer Sacral Temples or Wines of Blood & Pestilence on here, I just can't say that they add much to the album. While the former definitely improves in it's second half through the use of chanted vocals and acoustic guitar runs, the ladder just feels so average for that style of music. It's not badly done or anything, it's just so meh to me. If you've listened to ritual ambient music before, then the ideas present on this track in particular is nothing to get excited over. Also, I fail to see the point in making these tracks top seven minutes. It might just be me, but I felt like both tracks in particular definitely could have been cut in half and still have achieved pretty much the same ideas. Having said that, the black metal bits are just as fierce as ever. When the band are delivering these tracks, they hit them home - even if some of them go on for a bit too long. Tracks like the title-track or Set Triumphant - Nubti just blast forward, yet manage to retain the ambiance from the aforementioned ambient pieces. The band can certainly be straightforward and menacing when they need to be (which is, more or less, the majority of this record) but it's when they show their more jagged and slower influences, like on Dissolution (In the Sands ov Time) - Νεκροπολις, where things really get good. It's not genre defying or anything, but it just comes across as a bit more diverse and interesting (at least to me). In addition to a general slower tone on the second half of the album, these more metallic tracks also begin showing a bit more melody as well.
I'm not claiming this is some revolutionary black metal album that is going to get your knickers in a bundle over, but it's solid and well meaning (take from that whatever you will). There are some solid songs on here that really mean to create something dark and morose, and for the better part of the album's running time - the band succeed in doing just that. So, if any of that appeals to you, and if you can deal with some more ambient pieces, than give this album a listen.
Overall Score: 7.5
Highlights: Amenti - The Lamp Ov The Desert, Dissolution (In The Sands Ov Time) - Νεκροπολις, Erset La Tari - The Red Temple
Posted by maskofgojira at 8:13 AM