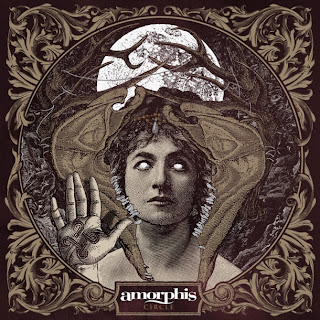 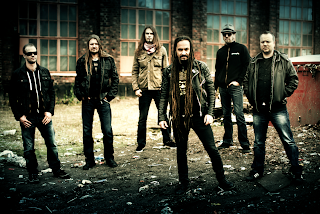 I am a fan of Amorphis, despite my waning interest in the melodic death metal genre (in addition to death metal in general) and do think that they are one of the better groups from their region of the world. They have also been a band more willing to experiment with their sound than other bands that came from their genre which is something I respect. I was hopeful that this new album would correct the misstep I felt the band took with their last full-length.
Back in 2011, I was in the minority when I said that I felt that Amorphis' last album The Beginning of Times was one of their weakest albums to date. Personally, I felt as if the band was running low on ideas on that album, and were more or less repeating the same things that they had done on the three albums prior to that one. It was a melodic death metal album with folk influence, and while most places I looked claimed it was one of the group's strongest release at that point, I couldn't help but feel as though I missed something. I have gone back to that album several times since initially reviewing it and I have yet to find anything praise worthy to say about it. So I was interested in what the band would decide to do for this album when I first heard about it. I didn't listen to the single that was released beforehand, deciding to avoid all songs until I could hear the entire album in order to avoid all preconceptions about what this album may or may not be. I was hopeful that the band would return to the strong songwriting that they had shown on albums before that misstep, but sonically I didn't really hold my breath for a huge genre shift.
Pretty much after getting Tomi Joutsen on vocals back in 2005 the band has ridden their folky melo-death sound for four releases til now, and I wasn't expecting a massive shift like the ones they did back when Pasi Koskinen was the vocalist for the group, but I was actually quite surprised when I listened through this album. Yes, it's not a massive shift, but it's certainly not as straight as their previous four albums have been. The riffing is a bit more, and I hesitate to use this word, progressive on here than on their last handful, while the overall sound is still very much akin to that of their last four full-lengths. It's not enough to scare off those who were introduced to the band in this current era and find it to be their best. It's not that alienating as tracks like The Wanderer and Narrowpath definitely play up to that very melodic sound the band has used on previous singles. Personally, I thought that the band peaked using this sort of sound on 2007's Silent Waters and have since then just been using the same ideas over and over, but this new album is a nice shift on that sound.
As a whole, and as many other people have rightly said, it's much more cinematic than any of the group's previous work. While it isn't quite as powerful on the first half of the album, which is the most similar to their recent albums, when it comes out in full, it really grabs you. The songs, even though they aren't all that long, feel more epic and grandiose than anything else in the band's discography. In addition to that, this is the band's most consistent album in terms of the quality of material. As I said above, I felt as if the band peaked with their folky melo-death sound on Silent Waters, and that included memorability and songwriting as well, not just my patience. While the first half of this album is certainly strong in terms of songwriting and memorability, that's what it seems to be there for, to grab those fans of more recent material but as soon as Hopeless Days opens it's like a punch in the face with how massive those keys sound, making the guitar riff in question sound even more powerful. For me, this is where the album really got me excited. The following four tracks bring a similar sense of joy and anticipation from me, each showing a side of the band that I either have never heard before or that they had left behind long ago. The likes of Nightbird's Song show the band at their most interesting and hardened vocally while still delivering strong melodic guitar work as a foundation. In addition to that the likes of Into The Abyss and Enchanted By The Moon feature some of the biggest hooks in the entire band's career.
I do believe this is the band's best release for several years and is hopefully a sign for future sonic explorations like this. They are really at the top of their game here, and this is strong enough for me to say it's up in my top 3 albums from the band (with Elegy and Am Universum). Very strong and definitely one of the best records I've heard to come out of the melo-death genre for quite a while.
Overall Score: 9
Highlights: Hopeless Days, Into The Abyss, Enchanted By The Moon
Posted by maskofgojira at 8:30 PM