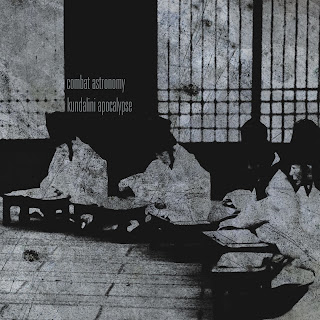 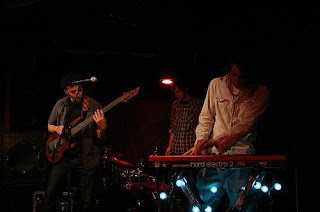 I've known about Combat Astronomy peripherally, for maybe a year or two at this point. I had seen them listed on a couple of lists of experimental and avant-garde metal groups but never got around to actually listening to any of their albums. So the day I happened to be scouring blogs to see what was out, I happened upon this and figured that I'd give it a shot.
For some reason when I looked this album up it was categorized as djent, which I don't really get. There is definitely synchronization between the guitar, bass, and drum parts but I can't say it ever really approached what is typically associated with that sub-genre. The grooves that this album approaches, I would say, are less Meshuggah rip-offs and more like Meshuggah was jamming with some sort of avant-jazz group. Aside from the use of horns and reed instruments on here, a lot of the drumming itself takes a more jazzy approach. It's less straight groove and more free, at least that's what I got from it. But the guitars and the bass definitely go for that bottom-heavy tone, without a doubt. The first time I listened to this album I didn't even think that there was guitar on most of the album because the 8-string was just so low and has this tone that really locks it in with the bass tone. It sort of confused me at first because when I looked the band up, the credits to this album clearly state that a guitar is used on here, but I really had to listen to it and try to find the different tones between the guitar and bass. In addition to that, there's so much stuff going on on here that you'll actually question what you're hearing if you're in a public place or anywhere where you can't simply focus on the music. On the second track, Path Finders, I can remember listening to it while I was in school and I kept looking over my shoulder because I kept hearing this organ tone but when I paused the song, there was no music playing (people were talking) but it's one of those weird experiences.
With all that being said, solely in the regard to songwriting, this album is a bit lackluster. That's not to say I don't like the sound of the album, because it's really interesting and strange, but the problem is just that I didn't think any of the songs stuck with me. None of the grooves really kept me as interested as what all the additional instrumentation was, from the drumming to the saxophone and clarinet solo to the organs and various electronic effects being played throughout. I found those to be the real highlight of this disc. When the guitars break away from the typical low-end grooves, I did find that it benefitted the band. Being less reliant on just low-end definitely did lend a sense of character to the songs that featured that element. But I have to be fair and honest and say that the lack of memorable songwriting did impact my overall enjoyment of the album. It also didn't help much that the album is pretty samey throughout, you don't really get a major shift in tempo (things are pretty mid-paced for the entire record, for the most part) or departures into either straight-up jazz or ambient or whatever, but you stay within this very, I hate to say it but, monotone sound for the better part of ten songs. Yes there are certainly parts where you get saxophone over ambiance or an almost trip-hop-esque intro, hear Wrong Wheels, but neither last long enough to really shift the impact of what you're hearing. The trip-hop beat eventually gives way to what you heard on the previous six songs and the sax solo eventually turns into a guitar drone that doesn't really shift the tone either. It isn't until the last two songs when things take more of a tonal shift as well as a sonic one, but, at least for me, by then it was too little too late.
So, while that last paragraph certainly was a bit negative, I have to say that I still enjoyed this record. It was fun and quirky and interesting to listen to even if it was a bit too samey for my own tastes. Hopefully some of you wind up checking this thing out and find out about a cool band though, if you're interested in jazz and metal fusions.
Overall Score: 7.5
Highlights: Quiet Mutiny, Telos, Cave War
Posted by maskofgojira at 5:42 PM