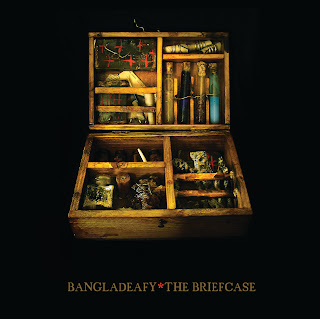 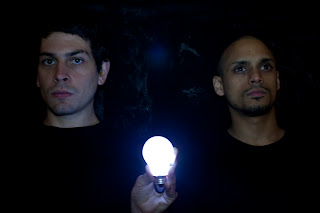 Bangladeafy was a duo I had never heard of before being sent the promo for this EP. The title of it surprised me enough to make me want to cover it, as weird as that might sound. The Briefcase is just such a strange title for a release that I was very curious what the band would actually sound like because of it.
This was very interesting because when I put this on I didn't know anything about the band but by the time those twelve minutes finished, I was left with smile on my face and a feeling of utter joy. This drum and bass duo play just that, drums and bass (with occasional vocals, and some addition flairs thrown in as well) in a very aggressive and somewhat spastic way and yet never once did I feel bored. Maybe you can blame that on the fact that this release is six songs long and only the closer, Pest Control, tops three minutes. It's a lesson in frenetic songwriting because these two guys take what is essentially some of my favorite ideas and do them. It's jazz, it's fusion, to an extent, it's funk, it's progressive rock but it's done in a way that definitely pushes towards the intensity of metal, at times sounding like a collaboration between Les Claypool (Primus) and Billy Rymer (The Dillinger Escape Plan) might sound like. There's also a bit of weirdness that I almost relate to Tom Waits as well, I don't even understand that, but there's a similarity in the absurdity in here and the kind expressed on Waits' material. Tracks move from surprisingly danceable to headbangingly aggressive, and there's plenty in between for your listening pleasure.
This was an absolute treat and is definitely one of my favorite EPs to drop this year. Certainly didn't expect this one but so glad for the opportunity to find out about this really awesome duo. If you have some spare time, do yourself a favor and give this twelve minute release a listen, I highly recommend it. It's awesome, not much more I can say besides that.
Overall Score: 8
Highlights: Dumpster Fire, Tubes
Posted by maskofgojira at 8:02 PM