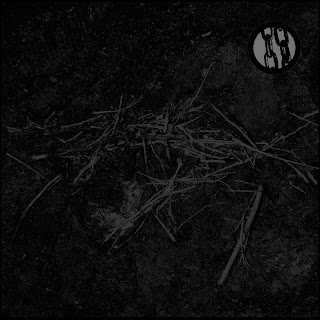 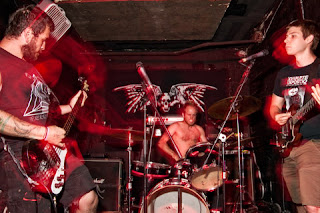 I was only vaguely familiar with Ruin Lust before deciding to check out this short little album of theirs. Really the only thing I knew about the band was that they shared a member with the likes of Fell Voices - who are a really cool band. Aside from that I just wanted to see what the fuss about this release was about.
As someone who has said numerous times that I am not a fan of the majority of band in the blackened death metal genre, this was an album I wanted to hear just out of curiosity. Nothing else; and perhaps that's why I found myself disappointed with how this came out. It certainly sounds like it came from an early 90s CD. Production is extremely raw, with pretty much every instrument being played fighting for space in the mix. The kicks are extremely bassy while the guitar distortion almost drowns out everything the guitarist is actually playing while the bass sits somewhere in the middle. Muddying things up even more. So, as you can probably assume, I'm not a fan of the sound of this record. But if there's anything that should be said in the band's favor it's the vocals, which for the most part are done in a fashion that really reminded me of early Lord Worm - meaning they were low and throaty sounding and I couldn't understand a single thing that was being growled. Also, when riffs can actually be made out, like at the end of Primal Vision, they're nice and fast and thrashy, which is not what I could tell from other songs that used more low-end. I mean, aside from that there really isn't much else to really talk about. I didn't really feel that beyond a few solid riff that this was anything particularly special or interesting, I was actually fairly bored for most of its running time to be honest. It passes the time, but I would rather spend the time with a record I actually liked more than just a little bit.
Yes, I'm not a big fan of this record or of many bands in this genre but hopefully some people reading this will check it out regardless. I'm sure if you do like groups in this genre you'll get some usage out of this little record as well. It's not for me, but it might be for you.
Overall Score: 6
Highlights: Primal Vision, Skin Hunger I
Posted by maskofgojira at 9:46 PM