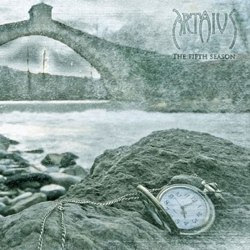 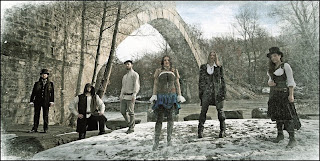 I don't really know folk metal too well, for better or worse, it's not a (sub)-genre I'm particularly invested in. There are certainly some very good bands, but they are far and few in between all the repetitive groups who continually rehash each other. I'm taking a gamble here, I was sent this album and want to give it a chance (as always, this preamble... was written before everything else).
I'm not going to pretend that I like folk metal, as I said above there are some good bands out there, but I've had a few too many encounters with groups that sound exactly like Korpiklaani or Finntroll for my tastes. If I'm sent a folk metal album, I'll listen to it, but I'm very wary of how much cheese there is and how "happy" they sound. I'm all for sounding joyous and whatever, but there's a point when I'm listening to it when I just can't take it seriously anymore and I just turn it off. I get bored and I get irritated. The press release I was sent with this album claimed it had some more progressive rock leanings as well as the typical folk metal ones, which was enough for me to at least press play on the first track. Honestly, when this thing began, I wasn't expecting much, but I was pleasantly surprised by what the band displayed on here. Yes there's cheese and all the stereotypical folk melodies that you and I and your sibling/parental figure/friends have heard done dozens of times before, but unlike those bands, this felt much less "metallic" and much less "happy".
I'll start with the former first. In terms of sheer heaviness, this band won't be high on your list. They have distortion on their guitars and bass, but honestly, it's more like rock heavy rather than metal heavy; and before you over-think it, I don't mean modern rock, think 90s rock - and not like hard rock. Think progressive rock here. Though the band still try and appeal to modern fans by adding in some rather odd sounding death metal growls throughout the album. I don't mean it's odd that they're using them, but they just sound odd in conjunction with a band that isn't all that heavy. It just sounds weird. When it come to sounding happy, I think it's all a result of the heaviness not being super heavy (man I'm using heavy so much in this paragraph) that this record doesn't sound exactly the same as every other cooky-cutter folk metal group in terms of sounding happy and already half-drunk. This has a bit more of a serious tone to it, the tone isn't quite as lighthearted. Listen to a song like Over The Edge for example, a track like this could be the prototypical folk metal song, with a poppy chorus and simplistic riffs - excluding the jazzy interlude - but the tone doesn't ever shift it into parody. The keyboards used throughout the album have a very particular tone, and for the longest time I couldn't place why they sounded familiar. In the closing section of Wind of Truth it finally hit me, the keyboard sounds reminded me of those used on Ayreon albums, which isn't a bad thing in my book at all.
Frankly, the main female vocals (since two of the women in the band perform vocals I won't say which is which) at times were a bit annoying. I don't get into the operatic style all that much (a reason why I don't listen to power or symphonic metal too often) but it was definitely more tolerable on here than many other bands make it, not simply due to the death growls used, but because the clean singing wasn't always delivered at that operatic range. There are plenty of spots on here where it straight melodic singing, not all this over-the-top stuff that is so commonly associated with female singers these days. It's a stereotype for sure (one that I'm certainly guilty of putting on bands) but I'm glad that there is at least one band who's singer knows that that style isn't required on every song.
This is definitely one of the best records I've heard from this genre in quite a long time and I'm glad that it came from a band I was not familiar with rather than one I was. I know some people won't give this record a chance because of the style the band play but if you're open minded, you give this one a shot. Fans of folk metal/rock as well as prog-rock fans should definitely give this one a shot, I seriously don't think you'll regret it.
Overall Score: 8
Highlights: Over The Edge, Horizon, Wind of Truth
Posted by maskofgojira at 2:44 PM