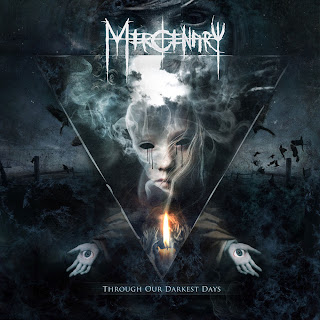 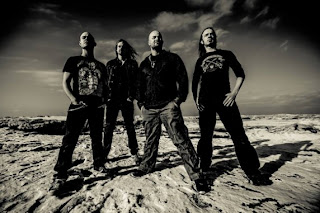 I remember first being turned onto Mercenary by my dad several years back when I was still really into melodic death metal bands. While I wasn't overly enthusiastic at first, once I heard records like The Hours That Remain and Architect of Lies I was hooked. However once the band was reduced to a four-piece I felt a weakening become more apparent.
The aforementioned albums above I think are some of the best examples of melodic death metal in the 2000s, the songs were catchy, the albums were consistently strong, and the sound was a nice blend of heavy and melodic. The resulting album from when the band shifted down to a four-piece, 2011's Metamorphosis, I didn't get into. In comparison to the two albums that came before it, it was extremely weak and uninteresting. It sort of felt as if the band were struggling to find their place again, they were on a new label, working with a smaller line-up, and trying to stay true to the sound they had really perfected on the previous two full-lengths (but had been playing with since Everblack back in 2002) while doing something different. While there were some ok songs on there, as a whole it just didn't match up and I know that at least I was disappointed by it; and the signs coming into this album didn't appear all that strong either.
I listened to Generation Hate when it was first released and just didn't care for it all. It's one of those power metal-ish sort of songs where the lyrics are all about standing your ground and standing apart from others while being really angsty. Musically it was alright but lyrically and vocally it just irritated me. So my impressions when I decided to actually listen through the whole thing were not high at all, however by the time A New Dawn finished I was on the band's side. That opener is easily the best song on the entire album. It's really a callback to their older ways in the way the chorus just explodes when you hear it and it just gets stuck in your head. Not only that song, but there are actually several songs on here that match up to that one in the realms of catchiness and memorability (but that one is by far the strongest, at least in my opinion). From my point of view this is a bit closer to a power metal album than the last two full-lengths have been, at least vocally. There's a lot of harmonies on here (which is something I'm always keen to hear if they're done well) and the general range appeared to me to be a bit higher as well. Instrumentally it still keeps things pretty close to the modern melo-death style with plenty of keyboards and chugging riffs. I mean, I'm no snob, if it works, it works, and for me, this worked for the majority of its running time.
So yeah, even though my attitude and expectations going into this were extremely low, this managed to keep me entertained throughout and turn me to its side by the end. I don't think it measures up to either of the albums I mentioned in the intro but this is certainly a catchy and fun little melo-death album. If you're a fan of the genre I definitely recommend giving this a shot (as far as I know these guys are getting more press since switching from Century Media so maybe you'll already have seen or heard of this album already).
Overall Score: 8
Highlights: A New Dawn, A Moment of Clarity, Beyond This Night
Posted by maskofgojira at 1:52 PM