It's been a little while since I caught up on EEE Recordings. Five of the releases below I've had for what seems like quite a while, and am finally writing up about because three new releases came out recently. Hopefully, if you haven't listened to or heard of some of these releases yet you'll still give 'em a shot. As always, all of these are reviewed from 1-8. 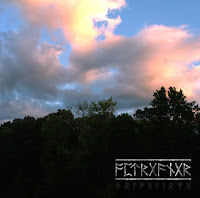 Much like the previous EP from this project, what we have here is easily some of the most straightforward and genre-consist releases from the label. The songs on here are short, aggressive, and, for the most part, very direct. Compared to the more death metal style taken on the Within Ur, Among Dis EP released earlier this year, most of the songs on here take a far more traditional black metal approach. Don't mistake the word traditional for meaning it's raw and old-school, because this has the same production tone as pretty much every other release from the label. Sonically though, there are a lot more similarities one could draw to groups like 1349 or Naglfar than to the older artists in the genre. But the few tracks that do deviate from this sound are clearly noticeable and stand out like sore thumbs. These tracks are closer to the more technical and progressive side of Njiqahdda than anything the band has done in a while.
Overall Score: 7
Highlights: Gylfi's Stream Roared, ...Of Clouded Sky 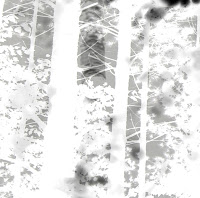 Continuing in the same vein as where the previous three installments of this series. You have an extended piece of droning black metal with drumming that continues at a pretty consistent pace, which for this release is fairly aggressive throughout, while the guitars drone on through waves of feedback, distortion, and reverb, creating a wall of harsh melody. Of all four parts released, this one definitely felt the most traditional in terms of style. It felt more like a "black metal" record that the krautrock vibes I got from I and III or the raw and noisy sound from II. Though don't think that means you don't have moments of droning guitar chords, because there is still plenty of that in here. The use of synth on here is a bit less interesting than in previous parts, as it appears to play more of an atmospheric role than one where it sticks out (intentionally or not). The closing minutes of the track definitely call back to previous sections through the use of the synth. It's not my personal favorite of the four sections, but it's a perfectly fine way to close out the saga.
Overall Score: 6.5
Highlights: Disembodied IV


Oaks of Bethel - The Spirit Molecule I & II EPs

Because I have both parts of this series at the moment, I'll cover both together here. The Spirit Molecule discs both take the project into relatively more bright territory (matching their cover artwork), at times recalling a similar mood from early material like The Folk and The Grounds or From Midnight Sun to Burning Wheel. Though by comparison the early material is far more abstract sounding, with both "sides" of this project delivering some of the most melodic pieces of music the duo have ever offered up. At times it almost appears as though it's moving into a similar direction as Njiqahdda's recent material has been going, with clearer production and more straightforward and "rock" sounding riffs. That isn't to say that the project has removed itself as far from it's roots as the other project has because there are certainly still plenty of droning doom sections and furious black metal ones, but the brighter atmosphere which surrounds the entire thing and the contrasting "rock" sections that are used on the first disc definitely forge a strange dichotomy within which makes it all the stranger when they abandon it on the second disc in favor of their usual sound. It's not bad per se, but it's just weird that the unexpected melodic turn on the first disc would just give way to the ideas you'd hear on almost every other release from the project. I just think that if what was hinted at on the first disc was explored fuller on the second it really could have been something special, but that's just my opinion.
Overall Score: 7 (7/6)
Highlights: The Spirit Molecule I 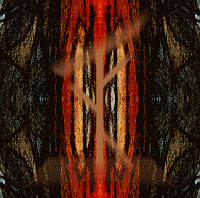 I say it in every review I do for this project, of the many projects from the men of EEE Recordings, Njiijn is the one I am least connected to. I've yet to hear a bad release from the project, but most of them just don't resonate with me as the other projects do. With that being said though, this is probably one of the best releases from the project in a while. The four songs on here feel much more connected to what the band is/was doing with their exploration of Indian lyrics and aesthetics in the recent work of their other projects. The low drone that opens Axis Mundi and carries through the pulsating drums and symphonic undercurrent of Omphalos to the more mechanical sounding A Current of Dragons and finally the open space of Fylgja. Each piece is able to stand on its own but as a whole, all four tracks coming together for this piece that is this EP, it's actually quite stunning. The entire thing is a well rounded and coherent piece of music that really stands up as some of the best material the band have ever released under the project. And then the last track comes in and really breaks down the walls of what was once there by transforming into a power electronics track. It's quite a jarring shift and one that really altered my feeling toward the record.
Overall Score: 7.5
Highlights: Omphalos, Fylgja

As with the two Oaks sagas mentioned above, these two EPs complete the Grain saga for Njiqahdda. With the duo taking their sound into a more straightforward rock oriented direction we have each release demonstrating such a shift before our eyes/ears. But as with the Oaks releases above, there are still traces of what the band used to be found within here. Riffs and song structures recall their more progressive side while the overall tone is much more meditative and rock oriented. Though the use of electronics is greatly increased on both, coming to a head on Prairie Falcon, a completely IDM-esque track that feels somewhat out of place when all three EPs are played together. While this is obviously all personal, I felt as if both these albums were much more engaging than Grain I was. Where there were definitely good points for that EP, the centerpiece of it was a sixteen minute long song that I just didn't find all that interesting, in the case of the centerpieces for these two EPs, it's the opposite. In the case of Grain II we have O-wel'-lin The Rock Giant, which is black metal in the sense that the majority of the song is tremolo picked but feels more driving than anything the band has done recently. On Grain III we have The Making of Arrows which along with The Theft of Fire, showcases some of the duo's most technical and aggressive material in quite a while. But both releases are just stellar pieces for the duo and contain some of their best material released this year.
Overall Score: 8 (7.5/8)
Highlights: The Raven Became A Great Hunter, The Theft of Fire, The Making of Arrows


Njiqahdda - In The Seven Woods EP 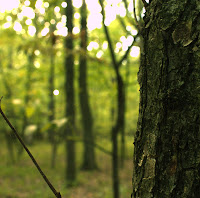 Following the progression into progressive rock territory recently, I had read on the band's forum that they were pursuing an even more rock oriented sound, and after listening to the direction taken on recent EPs and then hearing this, you can see there's little hope of them returning to what they used to be. These songs are arguably the most straightforward the band have ever released, both in terms of structure and style. The riffs aren't all that progressive, which was something even recent EPs contained, and instead take on much more of a background role. The majority of what's being played by the band on here is either more melodic lines or rhythmic chugs. While I didn't find myself as excited about these songs as the ones above, it has to be commended that this is the band's most concise bit of songwriting yet and that Under The Moon features what is perhaps their bravest vocal performance yet as well.
Overall Score: 7
Highlights: The Folly of Being Comforted, Under The Moon
Posted by maskofgojira at 8:02 AM