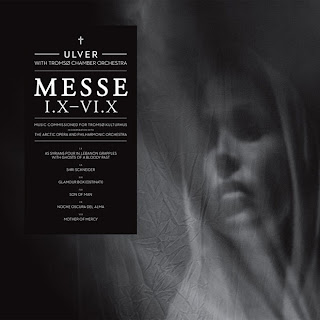 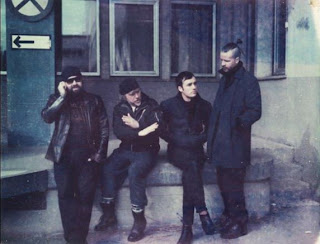 Ulver, one of my favorite groups is a band whose evolution I not only respect, but love. Though their evolution, I've been able to discover genres I probably wouldn't have gotten into without them (and thus would have remained a much more close-minded individual). But that's really neither here nor there in regards to this album so I'll try and be more subjective in regards to the review.
Just to get it out of the way first, the music on this album was commissioned for Tromsø Kulturhus in cooperation with the Arctic Opera and Philharmonic Orchestra which will bring a much different tone from either of the band's last two full-length outings, the more experimental soundscapes explored on Wars of The Roses or the psychedelic pop covers of Childhood's End, obviously; but I think the real surprise, if there is one to be had, is that it differs still from the more minimal orchestrations found on 2007's Shadows of The Sun, the record with which this album shares the most sonically. Unlike that record which focused on minimal compositions featuring one of Garm's best vocal performances, this album is almost cinematic in it's approach towards the compositions and features relatively little vocals at all. It should be noted that while I say cinematic, it isn't really the same way one would describe either of the scores the band has released in the past which took a more ambient approach. This is done in a much more traditional way, in terms of "scoring" anyway. There's the orchestra and they perform the pieces given to them. Though to say this is a "classical or symphonic" record in the traditional sense would be doing an injustice to what the band actually did here. While the majority of this album is definitely in that world, there are plenty of segments that give away some of the band's more "eccentric" qualities as well. Certain melodies reflect the band's more recent venture into psychedelia while electronics are scattered throughout the entire record, something any fan of their middle period work wouldn't be surprised hearing.
Given the band who composed this in question, it shouldn't come as a surprise that the pieces on here are incredibly somber. Even at it's most uplifting, there's always a sense of sorrow and melancholy that never fades, heard perfectly during the final moments of the opening track As Syrians Pour In, Lebanon Grapples With Ghosts of A Bloody Past. It's something that has always been present in the band's work, even since their metal days and it's something that's been present on each any every release they've put out over the years, whether intentional or otherwise. At it's brightest, Son of Man for example, the orchestration channels the subtlety of Ennio Morricone and the grandiose bombast of Hans Zimmer. Two very contradictory sonic styles, in the way I'm referencing them anyway, but, among others, these were two that stuck out during certain points in the track. It's also worth noting how this release works as music to a film not made, as obvious as that probably is to many who've listened to any of the band's albums. I mean, certainly this wouldn't be a score to any happy or uplifting flick and would fit more along the lines into something like a Bergman or, to a lesser extent, a von Trier (but that's just me).
I'm not sure how much this release will stand up in regards to pieces like Perdition City or the aforementioned Shadows of The Sun, or in regards to the metal fanbase who's reading this Nattens Madrigal, but it's certainly something not to be missed. It's another step into a direction plenty of us fans probably were not expecting, but one that at least I found gratifying and rewarding. If you're already a fan I don't see why you wouldn't check this out but as with anything the band has released for the last decade and a half, it's ability to appeal to fans of less experimental music is enormous. So if you just so happen to stumble upon this, please do yourself a favor and check it out.
Overall Score: 9
Highlights: As Syrians Pour In, Lebanon Grapples With Ghosts of A Bloody Past, Noche Oscura Del Alma
Posted by maskofgojira at 11:55 AM