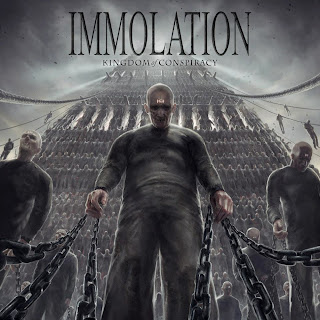 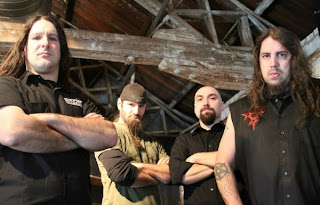 Immolation was one of the first "true" death metal bands I can remember getting into. Back when Headbanger's Ball used to be on tv late at night and they'd show music videos I saw one for one of Immolation's songs and was struck by how well crafted the song was, even for my lack of "taste" in the genre at the time. Even with my rather disinterested view on death metal today I still wanted to make time for this new album from the band.
In the world of death metal today, there appears to be a trend in production to move back to the sound of the early to mid 90s, which I'm perfectly fine with. Several of those bands go the extra mile and try and tackle the whole cavecore sound or just try to rip-off Portal, whichever, depends on the band. The other trend is for more of a sterile sound, which, once again, I'm perfectly fine with. This, to me, seems more popular among older bands who probably got their bad production phase out of the way earlier on in their career and newer groups who have only heard records from the last ten or so years from these older bands and are busy listening to the likes of the new Black Dahlia Murder and other bands of that ilk. That leads to more of a positive view on clean production from their part. Personally, I'd rather have a dirty and messy sounding death metal album to one that is polished and extremely clean sounding. I think Immolation is a band that has struck a nice balance between the two. While the production on their more recent albums, including this one, definitely leans more towards the cleaner side of things in this regard, their more dissonant and atmospheric ideas have yet to be snuffed out.
This record maintains that streak of their for keeping a record clean while allowing their sound to remain aggressive and dark (I'd say Immolation is one of the darkest sounding death metal bands around, but that's just me). On this record you have the band in top form again, doing what they do best. But I have to say that I just did not get into this record as much as I wanted to. I certainly didn't hate it or anything like that, I actually like all the tracks enough, none of them would be what I consider to be bad, but it just didn't stick with me the way their last couple have. It doesn't have the scope of Majesty and Decay or the tension of Shadows In The Light, it certainly didn't have to have either of those things, but this record just didn't stay with me. Believe me when I say that the highlights on here are certainly highlights though. Songs like Echoes of Despair and closer All That Awaits Us are simply stellar pieces of death metal. They capture so perfectly what this band does, the brooding atmospheres, the weird sounding riffs, and the catchy songwriting and wraps them up finely in small packages.
So keep in mind, this is by no means a bad album, each and every track is perfectly fine, this just did not resonate with me as strongly as some past records have. I'd still say this is much better than a lot of more modern bands are doing (modern meaning newer in this case). If you like death metal please check this out regardless of this review because Immolation is a great band who deserves your ears and attention.
Overall Score: 7
Highlights: Echoes of Despair, The Great Sleep, All That Awaits Us
Posted by maskofgojira at 4:24 AM