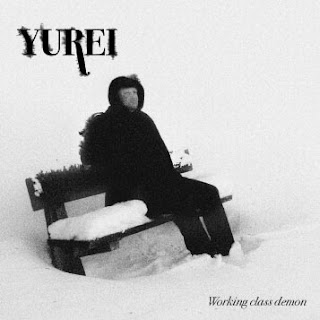 Coming from another corner of the black metal world, comes this project, whose mainbrain is not the average joe fronting a black metal group. This record takes a far more left-field approach towards composition and playing, not focusing so much on making songs aggressive or fast or catchy, but weird and abstract. This is not an album for people wanting to hear black metal that is "standard" or "regular", this is unique, no matter what box you end up putting it in.
The abstraction that this album is will surely confuse any person listening to it, whether that was intentional or not, it happens. The riffs, if you want to call them that, and melodies are very jazzy and dissonant, or not linear to put it simply, hear Your Black Waters for a clear example. I doubt that a lot of people will be able to say, "Oh, that's really catchy," or be able to really hum along to a melody line on here simply due to the dissonant guitar work on here. In a similar way to the Idolater record that I reviewed last month, this album is also quite hard to get into and disorienting. The vocals are also quite odd, while most of them are done cleanly, in an odd sort of speaking way, there are also several times where a baritone vocal comes in, which in the track above actually sent shivers up my spine. Actually, I don't know if others will hear this, but the vocals on here remind me of Paul Kuhr (Novembers Doom) for some reason.
With all the dissonant chords and melodies on here you'd think that this album would be totally self-indulgent and proggy, which it really isn't. I don't think there's a song on here that even has a solo on it, even the instrumental Velvet Demon. There are also quite a few choruses and riffs that manage to worm their way into your skull after a few listens, once again, I don't think I'd dare to say this album is catchy, though it is memorable. I was surprised at the sheer cerebral take on which this album left me once it finished, it felt as though I had just thrust my head into a wall.
Overall, this is a tough listen, and I suggest it to anyone that want to really check out something original or weird. This is definitely not something you'll put on if you want to rock out or headband, it's more of something to put on if you're feeling up to some avant-metal. Definitely check this out if you like weird music in any form.
Overall Score: 8
Highlights: Steamhead, I Am Champagne, Vendetta
Posted by maskofgojira at 6:34 AM