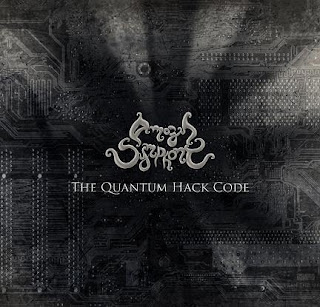 Anyone that was familiar with Amogh Symphony's debut album, 2009's "Abolishing The Obsolete System," knows that there isn't anything simplistic about this project. The music takes from progressive metal, technical jazz and fusion, world music, electronic music, and death metal and just blurs the line between them all. This album carries on that off-the-wall combination from the debut, but takes it in a bit more melodic direction, allowing melodies and solos to be memorable rather than just technical.
Being a part of the up-and-coming instrumental prog scene, including genres like djent and tech metal, this album features more focus on riffs and emoting feelings through each song. Now, from what I've read from other people that have listened to this album, there are those that think this is a cool album, and then there are those who believe it could have been a cool album. The dividing line being the concept of the album and making use of spoken word intros and outros within each track on here.
I have to give it to project leader Vishaljit Singh not only for being a skilled guitarist, but also for his excellent bass playing, hear a track like The Quantum Barrier Code Interpretation By Mainframe or X - Karna: Activated for some jazzy bass-lines. The playing on this album is consistent all the way through, demonstrating, obviously, technical and progressive performances and structuring. Session drummer Jim Richman also displays stellar playing on here as well, being able to move fluidly throughout more jazzy, quiet moments and full-blasting double-bass work used with the heavier and more metallic side. Speaking for performances alone, I don't think you could really fault this album, in my opinion.
Overall, this is a cool album, if a bit over technical for it's own good. Despite the increased use of melody and catchy bass and guitar lines, this album, personally, I found to be still too technical. If you like jazzy, technical, progressive music, then this is an album you definitely want to get your hands on.
Overall Score: 7.5
Highlights: Dvorzhetskii's Prophecy, Polymorphic Infection: Releasing Proteus, Decoded: Karnosiris
Posted by maskofgojira at 12:58 PM