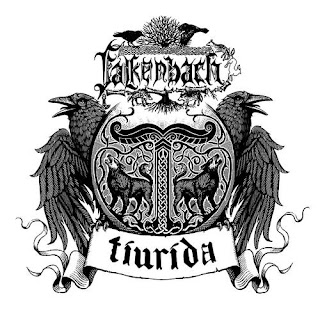 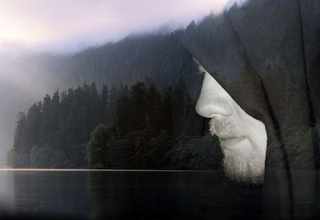 Back in the mid-90s and mid-2000s, Falkenbach released some of the best material to come from the viking metal scene. It's been six years since his, being main man Vratyas Vakyas, AKA Markus Tümmers, last release, 2005's "Heralding - The Fireblade." This new album continues the trend of increasing folk instrumentation over his metal sound. The production on this new album is also better, bringing a lot more sounds to the forefront of this album, especially acoustic guitars and flutes, the two things that really stood out to me.
This album really embraces the folk roots of Vakyas' musical backbone, making use of, what I consider to be, Celtic influenced melodies and various other folk instruments. Though Takyas has said in the past that he doesn't consider Falkenbach to be a 'metal' band, denying any influence from the genre at all on his music, tracks like Time Between Dog and Wolf might give you the impression he's lying. But with the overwhelming sense of melody and folk instrumentation on here, the metal elements within most of these songs isn't even all that prominent, used mainly as a foundation. The sound that Vakyas has developed throughout the years on his records has gradually become one that truly sounds epic and full, seeing from how much he says he only listens to classical music, it definitely comes through on here at least.
If you're expecting something heavy, like metal, you might be disappointed by this, and Falkenbach's newer material as well, as the distorted guitars are almost never the main focal point in a song. When they are, they're nice and loud, but they almost never do anything other than provide the backbone, I know I already said this. In a track like In Flames, an extremely catchy track by the way, the guitars play some rather simple chord progressions throughout the track, while more symphonic elements back it up and more melodic acoustic/clean guitars have the main melody; it's not the most technical sound, but it's one that definitely lends itself to Falkenbach's sound.
Overall, this is a very good album, a lot of folk metal groups are very generic, either turning into a Korpiklaani clone or trying to fuse it into black metal, which is a style that's been tried to death as well. This group/project is one of the few from the folk scene that can truly be called an original and having it's own sound. Definitely an album for fans of folk or melodic sounding metal, I'd even recommend this to someone that likes traditional folk music.
Overall Score: 8
Highlights: Where His Ravens Fly, In Flames
Posted by maskofgojira at 12:38 PM