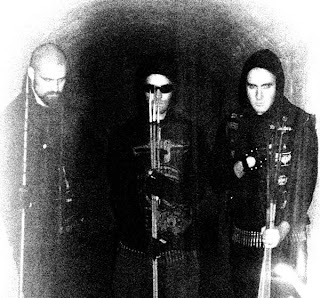 It takes balls for a death metal album to open with a three part epic these days. The first two parts clocking in both under five minutes each, with the third being just over ten, this is a real death metal epic. But as with all epics, it has plenty of diversity and stylistic shifts, ranging from tremolo picked black metal sections within opener Plague Evockation to more sludge and doom intro of Lex Ego Exitium. But of course, it's the lengthiest track, Tetravirulence, that's the most interesting and compelling to listen to, shifting the most throughout it's length, from more mid-paced sludge to bludgeoning black metal, it's all there.
There's a certain rawness to this record that keeps it sounding very old-school, groups like Autopsy, Incantation, and Immolation come to mind on here. The sound the music brings to the table on here just harks back to groups like those just mentioned where there was technical proficiency lurking behind very dark and profound riffs and guttural vocals. A lot of the riffs on here are pretty twisted as well, like black metal bands tend to do more so than death metal band do, in my opinion, heard on the title-track, Parasignosis. There's also that very dark atmosphere that lurks behind these brutal riffs and vocals that just makes it sound so different to modern bands, which also brings to mind other Profound Lore artists like Portal or Vasaeleth. The thick and massive wall of sound that makes up most of this album is made no more apparent than on the instrumental doom track, Kathenotheism, with it's slow moving and brooding sense of atmosphere that is as dense as anything to come out from doom last year.
Probably my biggest quarrel with this album however, is the use of ambient music serving as a solid chunk of this album, in groups that make that sort of thing a principal, groups that are usually within the ambient/atmospheric black metal or funeral doom realms often do, I found it kind of hindered this album. While Rift/Apex, in the middle of the album was short and rather appropriate for where it was placed, I found that the nine-minute long Ambient Outro to be rather useless. The sounds that accompanied the track really didn't do anything for me, so it kind of ended the album on a bit of a sour note for me.
Overall, this was a really solid record, but not one of my favorites right now, I could see this growing on me with a few more listens. I don't think this is as straightforward as my mind might have tried to make while listening to it, as some things wound up sounding great, while others just sort of blended together. If you like experimental death metal, check this beast of an album out for sure.
Overall Score: 7.5
Highlights: Tetravirulence, Banishment (Undecaphosphoric), Kathenotheism
Posted by maskofgojira at 11:28 AM