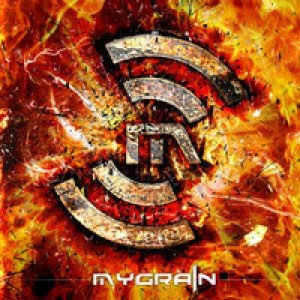 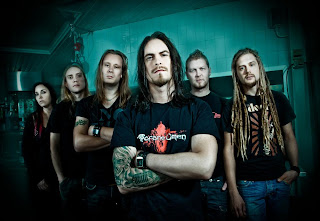 For those not yet acquainted with the likes of MyGrain, this is their third full-length and continues their trend of combining melodic death metal, AKA mid-period In Flames, with the atmospheric textures of a group like Omnium Gatherum. I know the melodic death metal genre is really divided nowadays, with some bands leaning more towards modern metalcore, others leaning more towards a raw and aggressive old-school sound; looking at it that way, these guys lean more towards the metalcore end of the spectrum, but are certainly not a metalcore band. These guys are still very rooted within solos, both guitar and keyboard, and technical playing rather than breakdowns and 2-steps. The clean vocals on here also never go into the realm of "cheesiness" or dime-a-dozen metalcore vocalist kind of sound, hear the chorus of Dust Devils and Cosmic Storms.
This new album takes a step in the right direction, leaving behind the almost techno/trance keyboards that were present on their last album. The keyboards on here are used in a more atmospheric and textural ways, instead of providing melodies. For me, the use of keyboards in this style, much like the aforementioned Omnium Gatherum, really makes a band sound epic and, dare I say, even progressive at times, A Clockwork Apocalypse for example.
I have to say that with all the above being very true, I found that the greatest leap forward for this band was their songwriting, no longer simplistic, for the most part, melodic death songs, on here, they add more variety. The more atmospheric and progressive passages allow this album to feel more complete and more original than just another modern melo-death album. It's hard not to think these guys are at least trying different, even if it's just the strained high singing on Eye of The Void, you can tell that at least these guys have an aim to sound like no one else.
Overall, this is a very solid melodic death album, and this is coming from a guy that's become pretty disillusioned with the melo-death genre in recent years. This album definitely takes these guys to the next level, which hopefully they are able to maintain for their next releases. If you like melodic death metal with a more modern production and a bit experimental, than definitely check this album out.
Overall Score: 8
Highlights: Dust Devils and Cosmic Storms, Trapped In An Hourglass, Cataclysm Child
Posted by maskofgojira at 12:49 PM