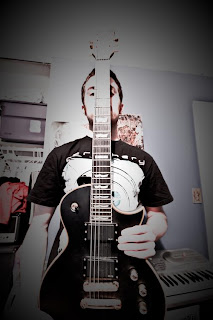 In you haven't been keeping up with the online presence of the artists that are generally put into the tech metal/djent genre, you don't know that Dan Dankmeyer is one of the genre's current rising "solo" stars. Though he's only released music since 2009, on his bandcamp anyway, he released four full-length records last year alone. Throughout his discography, there's a strong sense of melody that really makes him stand apart from his piers within the genre, both against solo artists and bands, some saying he's among the greats like Animals As Leaders, Periphery, and Cloudkicker.
This is his first album from this year and definitely my favorite from him so far. While his last release, "X", saw him making use of an 8-string guitar for the first time, this new album shows a much improved sense of songwriting with it. "X" had his traditional sense of tech metal being mixed with elements from metalcore and melodic death metal, it was an album that was pretty dark and heavy in comparison to this one which feels much more full and brighter. This album, to me, has an almost power metal or old-school prog-metal sort of vibe to it, the melodies and harmonies being used certainly hark back to the happier sounding melodies used by groups like Blind Guardian or Fates Warning, hear songs like Acrophobia.
If you think this album is all melody, you'd be mistaken, as Dan still has a few moments on here that are just groove. It's on tracks like Kill Now, Shred Later, my personal favorite on the album for it's great hook, that really don't have the best melodies but just have a massive sounding guitar groove that you can just bob your head along to. I found that this album, as with each of Dan's releases, is getting more and more melodic, which isn't a bad thing at all, but I found that when he just locks into a groove, he's just fantastic, which is something I wish there might have been a little bit more of on here, but the entire record is still very solid.
Overall, this is a very solid release, and my personal favorite from Dan so far. I have to say that he is constantly raising the bar for himself with each consecutive release. If you like very melodic, yet djent-y, sounding instrumentals than definitely check this out.
Overall Score: 8
Highlights: Familiar Faces, Kill Now, Shred Later, Name This Something Cool
Posted by maskofgojira at 6:33 AM