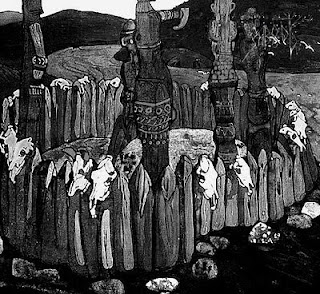 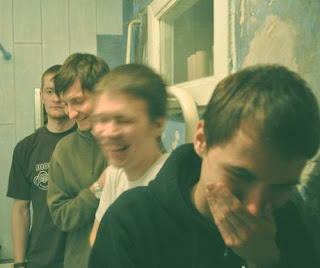 The first EP, though they had a split and demo before this, from this Ukrainian blackened hardcore band proves to fit that sound perfectly. I only just found this band scoring blogs for new music this year, and ended up finding this little gem in the ruff of some other mediocre stuff. Despite being only four songs long, there's a great amount of potential held within here, as many people have noticed as well, as these guys are being compared to the great Panopticon.
Sonically, these guys are more black metal than hardcore, though there are those moments where they delve into some more crusty sounds. These guys stick to the tremolo picked riffing for the most part with everything else kind of running just as fast, trying to keep up, hear II. Despite being labeled hardcore, there isn't really a lot on here, besides the crusty/noisy sounding production, a lot of this is actually pretty melodic and memorable, with a few brief forays into dissonance on III. I'll be honest, I liked this EP a lot, so it's hard to call this a complaint, but the thing I found that maybe dulled the experience of listening to this was the production on the drums. They aren't bad, but they sound a bit too tinny for my personal taste.
Overall, this is really solid and I enjoyed this quite a bit. I can't say that what's on here is original, but what's on here is crafted well and is done precisely. I'm looking forward to a full-length from these guys, definitely check this out.
Overall Score: 7.5
Highlights: I, III
Posted by maskofgojira at 8:07 AM