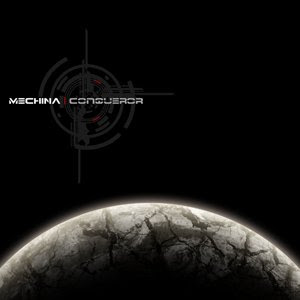 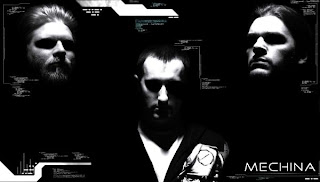 It's been six years since Mechina's first full-length album, "The Assembly of Tyrants," was first released, and although the "Tyrannical Resurrection" EP was released back in 2007, it had no new material on it. This, the band's second proper album sees them continuing with their industrialized take on black metal within a similar box as the last. I can't say that the band has really shifted their style so much that it would be obvious anyway, it's more in the songwriting and overall catchiness that I found this to differ from their debut.
There are several different things coming together to make the sound of the group which may not be the most black metal way of sounding. The metal aspect of the band's sound is very rhythmic and dynamic, it's aggressive and focused on the guitar/drums being rhythmically synced up, I've heard comparisons to Fear Factory, and it is fitting. There is also a heavy use of symphonic elements on here as well, which can bring the Dimmu Borgir vibe at times, opener Pray to The Winds for example. There is also the inclusion of other electronics into the sound, whether it be subtle textures or more noticeable techno sort of synthe melodies coming in and out of the sound.
Let me just say that Fear Factory fans will probably be able to get into this record a lot easier than a lot of black metal fans most likely will. There similarities to the band are pretty large, with the music perhaps being a bit more on the aggressive side and having a lot more of an orchestrated sort of sound, but besides that, this band is obviously very derivative of Fear Factory. The clean vocals on tracks like Non Serviam could be mistaken for Burton C. Bell's if you didn't know who you were listening to. Though, to reiterate, the orchestration is much more elaborate sounding and has a lot more in common with Dimmu Borgir rather than Fear Factory.
Despite it being pretty derivative, it's still a solid album and worth listening to. I can't say that at the moment these guys are on the cutting edge of the industrial black metal scene, but they are certainly doing something a bit different from some of the other groups right now. If you like Fear Factory or want a bit of something different in your black metal, definitely check out this album.
Overall Score: 7
Highlights: Anti-Theist, Internecion, Conqueror
Posted by maskofgojira at 12:48 PM