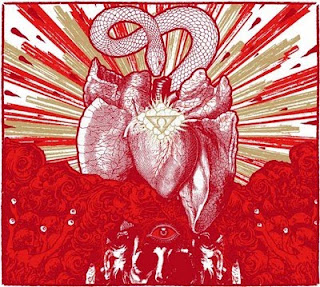 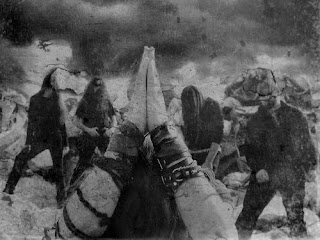 Bursting forth from beneath the scenes of underground black metal comes Ascension. While very little is actually known about the members themselves, I've learned that they do share some affiliation with the mighty Katharsis. There's a similar interest in the darker realms of religion and mysticism in both bands, as well as a keen sense for songwriting, but besides that, you'll have to find out yourself.
Musically, this thing really just rips itself out from the haunting intro, Open Hearts, with Grey Light Sibling, and just thrusts itself inside your brain. This track in particular, not only with it's eerie and discordant sounding riffs, but also with the disturbing screams and howls in the background really worms itself inside of your head. I found that this record to have a really unique sounding atmosphere, it was unlike any other I've heard from black metal, it's not as dark or morose sounding, it's not so much bright or hopeful, as much as introspective, maybe even revelatory, if that makes sense. The entire record feels like a single "story" if you will, where you're being taken through a person's life from birth to death.
I have to say that (like with a lot of the other releases I'm reviewing this week) if I had heard this album earlier this year, it would have definitely made my end of the year list. This thing is so addicting and abstract sounding at the same time. The riffs are so catchy and melodic, but never cheesy or sounding overly melodic, as in, it doesn't sound as though the band is trying to make themselves accessible. The riffs on here, as said, are incredibly catchy, while remaining firmly black metal, there's hints of thrash and progressive metal elements in here as well, hear Grant Me Light for example. The album closer, and title-track, Consolamentum, is also one of the best album closers I can remember from last year, in my honest opinion, it's totally progressive without being "progressive," it's being forward thinking and original without showing off or becoming too self-indulgent.
Overall, a fantastic record, there isn't really anything bad I can say about it. There's something here that's definitely been honed and crafted, as this does not sound like just an ordinary debut album. Definitely one for any person that considers themselves a fan of black metal, a must for sure.
Overall Score: 9.5
Highlights: Every Song Is A Highlight
Posted by maskofgojira at 8:48 AM