Kudzumind - Travel Songs For The New and Improved Future (2011) 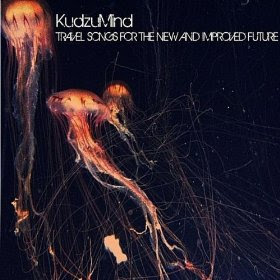 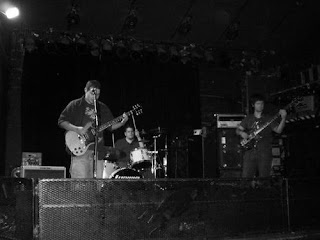 I'll begin this by saying, no, this is not a retro-prog band, they don't recall the whole 60s and 70s rock, this band recalls more Porcupine Tree than King Crimson. I won't say that the whole Pink Floyd influence isn't on here though, because it's way too obvious to not mention. The ambient and spacious vibe that's present in both PT and PF are used throughout this record, which is something that works in their favor. There's also a pretty solid grasp of jazz fusion on here as well, hear Memories of Ghosts In Transit.
Despite their progressive leanings, this band still has a bit of a metal influence, even if it is the 70's metal, IE. Black Sabbath, Led Zeppelin, and Blue Cheer, hear The Aftermath. Nothing ever really gets too heavy on here, it gets distorted, but thanks to the production, it makes things sound a bit foggy at times, which actually manages to bring a bit of a vintage feel to the disc. The distortion honestly doesn't bring all that big a presence to this record, unfortunately; and what I mean by that is that the heavy parts don't really bring a heavier or more aggressive feel, and there aren't even riffs as much as chords, so the feeling from distorted to spacey doesn't differ all that much.
I have to say the biggest problem with this album is the songwriting, it's just pretty weak. A lot of these songs just aren't all that memorable, despite the few that are, it's just not enough to justify it's sixty-plus length. There just isn't enough memorability on here to make me want to listen to the whole record over and over again, though there are a few songs which I would say are solid and I would be able to play over and over. Another problem I have with this album are the vocals, they're just plain bad, at times they're tuneful and fit, but most of the time they are actually cringe worthy, hear Pulling The Curtains On Silence.
Overall, this is an album I'm really on the fence with, it has it's moments of being really cool and unique, but then there are moments that just bore me to tears. I could definitely understand if there are those that find their take on the 70's prog scene different and refreshing, but remember this is just my opinion. Check this out if you're into groups like Porcupine Tree of Pink Floyd or stuff like that.
Overall Score: 5
Highlights: I Was A Wreck, Let Bygones Be Gone, Karnival Kalderon: Movement I
Posted by maskofgojira at 6:35 AM