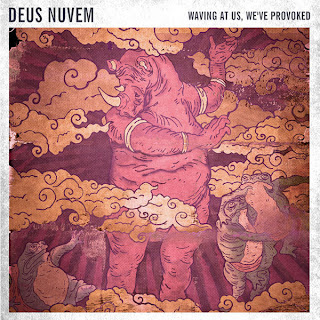 Aside from possibly a few things here and there, that might have still been pretty metal, I haven't covered much fusion since 2010, and even then it wasn't a whole lot. I found this album while looking up prog-rock albums that were released this year, so I was coming into this expecting more of that. Along with that, I really haven't covered a whole lot of music from South America, so, yet another reason why I wanted to cover this.
Since I first found out about this album through its cover art, I found it on rateyourmusic.com, I wasn't really all that sure what kind of prog it was going to be. Saying something is "progressive rock" is kind of tricky because it really isn't the sort of label that will give you a good idea of what a band actually sounds like. The seven song that make up this album are really more like short cuts of a longer piece, and one track really doesn't sound like another, so listening to one track really won't give you a great impression on what the entire disc sounds like. Throw into the mix that this project takes a rather eclectic approach towards composition and you've really got a tricky album to try and describe. Death of The I comes off as a sort of avant-garde jazz sort of track that goes from pretty mellow cello and bass into more screeching string plucking before going into territory that wouldn't be all that far off from John Zorn's The Dreamers project, bringing in violin, drums, piano, and a xylophone, among others. You'll find that there's a pretty wide range of instruments used throughout the album as well. That jazz approach is really the only consistent part of this album, as each track's actual performance can go from soothing lounge-esque to crazy and off-the-wall jams. You really won't get into anything that's too close to progressive "rock" until Red Sun, part one and two, where the band bring in some guitars and organs to add a bit more of a fusion element to the album.
I don't know if this is "technically" an EP, but I'm grading it as such because it's under thirty minutes of music, but beyond that I think this is a pretty solid debut release. There's quite a bit of ground covered on here that is really interesting and diverse. If you're a fan of more instrumental, there are some vocals on a few tracks, based jazz-rock (kind of), I think this is something that you should definitely take the time to look into, I doubt you'll be disappointed.
Overall Score: 7
Highlights: Triângulo, Red Sun I
Posted by maskofgojira at 11:59 PM