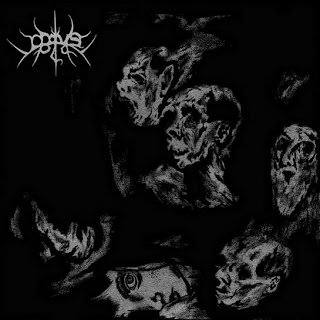 Last year Obolus released their debut demo and really caught everybody off guard with it's interesting take on atmospheric black metal that included hints of blackgaze in it. While the sounds present on the two songs from that demo weren't overly original or unique, they were done well and were concise pieces that definitely captured the attention of myself and many others. This EP has followed rather swiftly after that demo (I think it's only been a couple of months) and so I was rather intrigued to see how much the band/project had evolved since the demo.
Within the five tracks that comprise this EP is a notable development since the demo, which is quite interesting from my point of view. Like I said above, the demo was definitely based within a sort of blackgaze kind of melodicism that perhaps made it a bit difficult for some people to overcome, while that kind of melodicism remains on here, it is certainly not as up-front as it was. It's certainly higher on the atmospheric black metal scale than it was, which is perhaps why it's getting that extra bit of praise. While there is essentially only three new songs on here, the two interludes are actually quite well utilized and most certainly bring a certain mood to release that helps it possibly jump over the humps that may have been caused without them. Probably the most obvious highlight on here is Grievance, which is easily the most exploratory song the group/project has conceived to date. After a winding intro the track moves into pure atmospheric black metal territory that definitely has hints towards some of the giants in the genre without sounding like direct rip-offs.
Like I said at the beginning, I wasn't sure how much progression would have been made within only a couple of months, but these tracks are certainly a lot more well rounded than I had expected. It's good to see a band/project evolve into the atmospheric black metal genre through releases instead of just starting out attempting that style. It's a definite step forward for the group/project and I look forward to what is released next.
Overall Score: 7.5
Highlights: Hatred, Grievance
Posted by maskofgojira at 1:32 PM