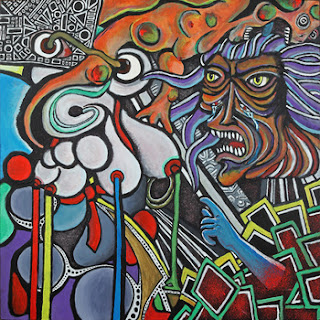 I don't get the opportunity to cover a whole lot of progressive rock on here, unfortunately. Despite my love for the genre, a lot of newer groups just sound boring or uninteresting to me and so I don't wind up writing about the genre as much as I would like to. So it was with great pleasure that I was sent this album, a progressive rock album that isn't either of the above.
Although my intention is to not come off as pretentious, no matter how I say this next sentence, it's going to come off that way; but as a person who listens to a lot of psychedelic and progressive rock from the 60s and 70s, it's important to note the evolution of the "progressive" genre. Obviously, even a novice should be able to point out that the genre has its roots within the realms of jazz, and whilst I'm in no way saying that every band under that tag should have that as influence, it's important to note how many newer artists don't even acknowledge that. Without jazz artists like Miles Davis and John Coltrane, to name a very few, we would never have the likes of Dream Theater or Opeth, and all the bands that have taken influence from them and ripped them off. Hell, there are plenty of modern prog-rock bands who don't even site jazz as an influence, and while that's perfectly fine, it's great to find and hear a band that is perfectly aware of the roots of the genre. So it was with great pleasure that I was able to get a hold of this album.
Make no mistake, this is a prog-rock album, not metal, and even saying rock is stretching the boundaries of the term a little bit. Let's just call it a modern jazz-fusion album and be done with it. The album doesn't really cross into heavier territory until the album's closing track, Taedium Vitae, which brings in some distorted guitars into the mix. Jazz players, as much as they're recognized for excelling in their instruments, also had a good grasp on dynamics, the good ones anyway, so that even when they were improvising, there was always an ebb and flow to what they were doing. Throughout this entire album, dynamics are used to near perfection. The band make full use of a wide range of ideas that bring to mind the dark-ambient jazz of Bohren & Der Club of Gore, the post-rock climaxes of a group like Godspeed You! Black Emperor, and the more technical, call it mathy, off-the-handle playing of a group like Ruins. It's an eclectic mixture of ideas, granted this is just what I heard, and there is much more inside that other listeners will surely find as well, but the band combine the elements in ways that make each song interesting and gripping from start to finish. There's also a healthy dose of more avant-garde tendencies in here that I really enjoyed, which recalled my love for groups like Mr. Bungle during some of it's more quirky moments, Le Plouc being the prime example. Luckily, the band never crossed over into John Zorn-esque freeform, which could have made this album a lot more irritating. I have to say that on first listen, I really didn't think too much of the vocals, but the more I listened, the more I took an interest in them. I know it's going to be an odd comparison but they actually reminded me a bit of Jason Mendonça's (of Akercocke) singing voice, and occasionally made me think of Kvohst (ex-Code, Hexvessel), and neither of those is a bad thing.
I thought the album was really solid and did a good job at putting an interesting spin on a genre that has become rather predictable within the last couple of decades. I look forward to hearing more from this band in the future because judging by this album, they can go into a lot of different areas, and it's quite exciting to wonder exactly where they'll wind up going. It's an album that more than certainly deserves your time if you consider yourself a fan of experimental music, as it has apparently appealed to people who aren't usually into prog-rock or jazz normally.
Overall Score: 8
Highlights: Decadence, Le Plouc, Taedium Vitae
Posted by maskofgojira at 11:09 PM