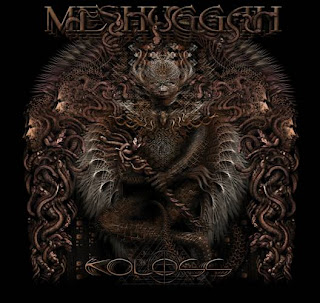 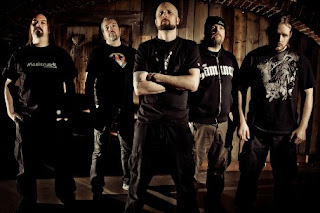 I guess I'll throw my own two cents in about this album seeing as it is one of the biggest releases that's gonna come out this year. I'm obviously a fan of the great forefathers of the djent movement and one of the biggest underground groups in metal (perhaps), so this review was gonna happen. I'm not a long-time listener (I'll admit) and first got into the band around the time of 2005's Catch Thirty-Three album, but I have to say that without tooting my own horn, I think I've turned a couple people onto the band anyway.
I think it's pretty agreeable that this was probably one of the most anticipated albums for 2012 for a lot of people. Whether they happen to be Meshuggah fans or fans of djent or whatever, a new Meshuggah record is always a special occasion. Even before this thing was released, I had read a couple of reviews to kind of get a feel for what the band were doing, aside from the two tracks they had released before I heard it, and most of the reviews either told me that people were absolutely in love with it and felt that it was the band's best album yet, or there were people who felt the hype was undeserved. Whether or not those people felt the album was bad or boring on it's own or that they felt it didn't explore anything original after the debut releases from the big-four of djent. The impression those reviews left was that those people were disappointed that the album wasn't as progressive as something like Periphery, not as ambient or atmospheric as TesseracT or Uneven Structure, or as crazy as Vildhjarta, and after hearing those releases within the last two years, they felt that this album didn't do anything they hadn't heard before. So even before hearing the whole thing, I knew that it was dividing a lot of people, which I always think is a good thing.
I should say that my favorite Meshuggah record is Nothing, so I rather enjoy when the band are more mid-paced and just get into a solid groove as oppose to when they're embracing their thrash roots. This album kind of presents the band's most diverse offering yet, with songs that retread some past ground while also exploring some newer territory as well. After listening to this album, I kind of made the joke that if Nothing was Meshuggah doing sludge and groove metal, this album is Meshuggah exploring elements of doom metal. Opener I Am Colossus is very slow, heavy, and plodding, and will most likely turn off quite a few people because in actuality, it's pretty minimalistic, even for a Meshuggah song. On the other hand, you have tracks like The Demon's Name Is Surveillance or The Hurt That Finds You First, a track that might be hard to even tell it was Meshuggah if not for the vocals, that kind of harkens back to the band's earlier, thrash metal roots, with much faster riffing and, to an extent, less focus on groove. To that end, it works out that the production on here is a bit more raw, which stops the band from sounding quite so mechanical. I think it's pretty agreeable that the past couple of albums have sounded like the band were a bunch of machines performing songs, but on here, it really feels more like a band.
Like I said above though, I happen to prefer when the band go for a more mid-paced groove and just bring the hammer of heavy down. Tracks like the awesome Do Not Look Down or Break Those Bones Whose Sinews Gave It Motion are probably the best examples of the band doing what, in my opinion, they do best. I also think it's worth noting that some of these tracks are quite "atmospheric" for the band, making this one of the band's darkest records, overall anyway. Then you have the obvious shocker of a closer, The Last Vigil, which is a total change of pace for the band, focusing on their ambient side and just bringing the album to a moody and calming end. For those that have listened to TesseracT's debut, the comparison between the ambiance found on that album and this album's closer shouldn't come as a huge shocker, but for those who haven't heard it yet, they sound almost eerily similar.
Meshuggah fans rejoice, the band has not failed us yet and this album continues their streak of great albums. For how slow it actually is, the album is really well paced and put together, making for a very fluid listen that goes by pretty quickly. It's actually a little shocking that this album is as much of a grower as it is (hopefully that makes sense) and it continually seems to get more and more enjoyable as time goes on.
Overall Score: 8.5
Highlights: Do Not Look Down, Behind The Sun, Demiurge
Posted by maskofgojira at 3:05 AM