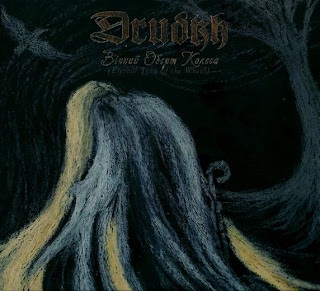 Well, after much anticipation and hype, both positive and negative, we have the new Drudkh record. Possibly the most well known black metal band from the Ukraine (correct me if you think I'm wrong) has been progressing forward since their inception with nary a wrong step taken. 2010's Handful of Stars album got a couple fractions of their fanbase upset, though I personally liked that album, this album was rumored to return to their older style.
The band's sudden shift into post-black metal/blackgaze on their previous album was a turn that fans found unexpected, and was greeted by more than a few fans with unwelcome. The clean guitars, shoegaze and post-rock influences, and more mid-paced songs left many scratching their heads as to why the band had decided to release an album like it, and many will claim that it was to cash in on the blackgaze movement that was, and still is, quite popular. While I didn't think the album was that bad, both when it was initially released and even now, I do have to admit that it did sound like there was something missing from that album. The band then decided to continue forward with the shoegaze and post-rock sound and just get rid of pretty much all the black metal and just get Neige to come on board for their Old Silver Key project, which released their album last year. Many have claimed that that album is poor and lackluster and a total failure, while I always thought of it as about average. Despite how you may feel towards those releases, I personally think that after listening to this album, they were necessary outlets for the band. If you think of the path that Drudkh has traveled down, stylistically, each album hasn't really been a huge departure from the one before it, except for maybe 2006's Songs of Grief and Solitude, but those releases allowed the band to explore something different from what they had done in the past, and has led us here.
What we have on this album is, more or less, what the band had promised to do, return to their roots. Sonically, this album does bring back the more aggressive black metal edge that was lost on their last album as well as a bit of the folk sound they've become so well known for using. However, to say that the band has totally rid themselves of all of their post-black metal/blackgaze traits would be incorrect, as the atmosphere on this record recalls that of their last with dark and cold synthesizers filling up the background of these tracks. Now don't get me wrong, this album is certainly a more focused and well-rounded album than their last one, I'd go so far to say it's better than the last couple of releases actually, but there's something to be said for the outright hateful disposition that an album like Estrangement had, that you won't find on here, and to an extent, it's a little disappointing that it isn't as intense as that record. Having said that, I will say that the mixture of the dark and melancholic atmosphere with the more mid-paced black metal riffing, Farewell to Autumn's Sorrowful Birds, is a much better fit to the band's sound than their venture into post-rock and shoegaze.
From what I've read, the band has said that each of these four songs, five if you include the intro, represents a season, starting with spring and ending in winter, and I think that they do a good job at personifying each season. When Gods Leave Their Emerald Halls is a blistering piece that is definitely the most intense track on the album, meant to be summer, while Night Woven of Snow, Winds and Grey-Haired Stars is a much more mid-paced piece that at times could be called almost sludgy but manages to recall the brutality of the winter as well as its beauty. Each track does an amiable job at creating a sound that paints a picture in your head. I should also say that while I don't think the concept of writing an album inspired by the seasons of the year is original, the men in Drudkh do a much better job in both personifying the seasons and condensing them down to a single track better than any other band I've heard do with that concept.
In a sense, one could call this album the missing link between Microcosmos and Handful of Stars, though I doubt anyone actually will, but I enjoyed it more so than either. I think that this album, while some have already been turned off by it, is an album that will generally be regarded as a return to form (not that they ever left the pantheon of awesomeness). If you have not yet been introduced to the greatness that is Drudkh, now's a good a time as ever to do yourself a favor and discover one of the best bands in the Eastern European black metal scene, if not the whole world. Let the wheel forever turn!
Overall Score: 8.5
Highlights: When Gods Leave Their Emerald Halls, Night Woven of Snow, Winds and Grey-Haired Stars
Posted by maskofgojira at 6:04 PM