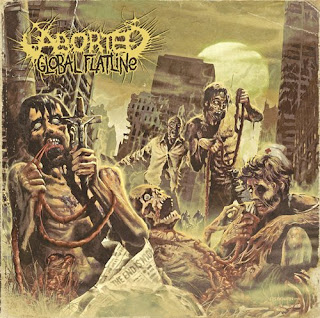 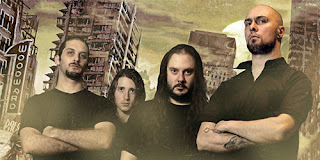 I'm not sure how cool it is to say but one of the first death metal bands I ever got into was Aborted. I can still recall seeing one of their videos on Handbanger's Ball (back when it was actually on weekly) back when I still thought that metalcore groups were the heaviest a band could get without sounding like mud/trash. With all of that withstanding, I have to say, not that this is an unpopular opinion, that the last couple of releases from the band have been less than stellar.
I'll get my prejudice out of the way first so allow me to say that I have yet to hear a record from Aborted that is as good as their sophomore release, Engineering The Dead. No matter how much I've enjoyed their work after that album, none of them have reached the same level of songwriting, technicality, or memorability of that album, at least in my opinion. Their last couple of albums have been decent enough, nothing extraordinary, but not terrible either, but have done little more than provide me with a handful of songs here and there. When I started hearing more about this album, I wouldn't say I became excited, but I did become rather skeptical because a lot of people were claiming that this was the best album the band had released in a while, and I wasn't really sure I could believe that. Based on the songs the band had released prior to the album being released, I have to say that I wasn't really impressed. Those songs were decent enough, but weren't really anything special that made me sit up and go wow after hearing them.
After sitting with this album for a little while, listening to it here and there, I can say that while I still think it isn't their best album, it is their best in a while. Unlike previous releases which have only contained a couple of songs that I would want to revisit, a lot of the songs on here are pretty interesting and feature some pretty solid riffs and melodies. I also like that Sven de Caluwé has returned to his lower and more guttural vocals as his main choice of vocals on here, it certainly does bring back hints of how he sounded on the band's first couple of albums. Now, I'm not really sure how I feel about the bass-drops that are used on here, but I can say that some of them will most likely wreck your car stereo if you have this playing loud. I actually find it a bit strange that no matter how brutal this record is and no matter how much the band claim that it is, more or less, a return to their older sound, I can't help but think that this album actually contains some of the band's most melodic songs to date. Tracks like Of Scabs and Boils and Our Father, Who Art of Feces were surprisingly melodic for the band and I could honestly imagine hearing them being done by a modern melo-death band, if they were an above average melo-death band that is. This leads me to the conclusion that this album actually contains some of the best songs the band has ever written and recorded.
Most of this album is pretty fast, as goregrind/death metal should be, but personally, I actually thought that when the band slowed things down on a song like Expurgation Euphoria, they really showed how good they can be at writing grimy, sludgy death metal that just lurches forward. It's not as immediate a song as the ones that had come before it or what follows it, but it was a track that immediately stood out to be because it was so different. For a song that is still pretty short, it's under four minutes, this more sludgy midpoint really marked a change in the album and was the point where I kind of knew that the band was definitely in a better place (in terms of songwriting and band compatibility) than in a long while. After this track closes, the band actually manages to integrate more atmospheric melodies into the songs, not all of them, but a track like The Kallinger Theory definitely had an interesting sort of dynamic that I haven't really heard Aborted utilize in the past, and I'm glad that they've embraced more atmosphere into their sound.
It's a solid album and a solid return to form for the band. There wasn't a track on here that I didn't like, though there are certainly those I do prefer, obviously as seen below are my personal favorites, but that's the first time in a long while where I haven't really had a problem with an Aborted album. I think that whether you're an older fan of the band or if you're just starting to get into them, this wouldn't be a bad place to start at all. Gore hounds go nuts!
Overall Score: 8.5
Highlights: Of Scabs and Boils, Expurgation Euphoria, Endstille
Posted by maskofgojira at 7:09 PM