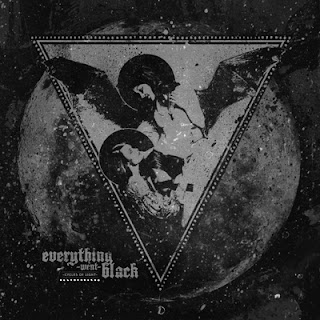 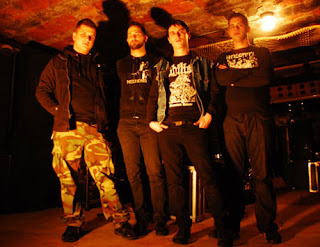 It's a little weird looking back at the back catalog of Prosthetic records because I remember first hearing about the label around the beginning of my Freshman year of high school. Up until a year or two ago, the label was more well known for putting out metalcore and deathcore albums, granted, they were responsible for releasing some of the biggest releases of those genres for a while, but now they're putting out more interesting, and in my opinion better releases. I assume a band like this was signed because of the success the label had with Trap Them, but is this really any good?
I'll say right off the bat that this is not as good as Trap Them (whether that's a positive or a negative is entirely subjective). What I love about Trap Them is the intensity and energy that I can feel when I listen to their music, even if it's on a record, it still comes through clearly. So, on that level, I would say that Everything Went Black does manage to achieve that at times, but musically, because it's more rooted within sludge and crust punk, it hardly ever reaches the same levels of grinding aggression that Trap Them manages to achieve. Now, obviously to expect the same results from every band within a particular niche is stupid, let alone bands that are only mildly similar, so I won't go on and on comparing the two bands since they are quite different stylistically. Personally, the band's take on sludge brings a more restrained kind of energy to the album, which has both its positives and negatives. It works when the band makes use of longer and more drawn out sections so they can build up tension before finally exploding. Where it fails them is when they have shorter songs that are just bursts of aggression and make the longer songs feel too drawn out for their own good, so they act contradictory to each other.
However, that's not to say that the longer songs are slow and drawn out, on the contrary, both Parades and Kingdoms are tracks that manage to put most of the other fast tracks to shame. The way these two songs are performed is kind of how I wish the entire album was done because they just drive forward full-throttle and the band pulls out some really cool riffs while allowing the song to progress. There are moments where the song slows down to a crawl, but it doesn't feel as forced or restrained, as well as moments where there's more melody being injected that sound more refreshing since the band aren't limiting their song lengths to keep these traits locked away. Hell, they even make use of a cleaner and more atmospheric passage on Kingdoms, and it works. Even when the band don't stretch themselves too much over a single song, it really seemed like the longer the song was, the more memorable, the more interesting, and the more passionate it felt.
It's a solid release, I wish it was a little more diverse, but since this is a debut full-length, I guess I can look forward to that in the future. There are definitely some really good and standout qualities the band exhibit on here, I just hope they choose to embrace them more so on future efforts. Check this out if you're into more sluggish metallic hardcore I think you'd enjoy this quite a bit.
Overall Score: 7
Highlights: Parades, Amongst Wolves, Kingdoms
Posted by maskofgojira at 6:09 PM