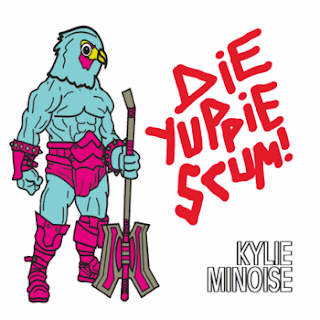 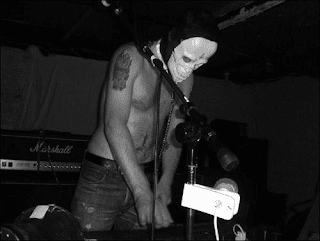 Lea Cummings, the main brain behind this project, seems like a rather intense fellow. From the footage I've seen of him performing live and the little bit I've read about this project, the performances that make up his music are violent and intense. When I was first notified of this album, I was under the impression that it was going to be more of a noisy dance-pop album, and expecting that, I was in no way prepared for this album.
The noise-pop sound that I was perhaps anticipating from this release probably caused me to view this album as more of a disappointment because it was so different than what I had expected it to be. I guess that, based on the name, I was actually expecting a female sort of singer-songwriter album with a lot of noise, or something more akin to a shoegaze or dream pop record. Instead of that, this is closer to what I'd imagine would result from if Prurient's last album, Bermuda Drain, had worked more within the confines of hip-hop and house music instead of darkwave and synthe-pop. It's a beat heavy album that at times can recall hints of industrial music. Personally, while the beats are all well and good, it's the noise aspect to the album's sound that was able to keep my attention throughout. Most of the tracks on here were able to utilize the noise in various ways, whether it was used as background noise, Psychodelic Stunt Academy!, or if it gradually built up and got louder throughout a given track, Earlobes of Shame Buckets of Bile! for example. I thought that when the noise aspects took a larger role on a given track, it was more of an engaging listen that felt like it actually evolved while the track was playing, in comparison to others which were a little more static. I actually thought that a lot of these songs would be more intense based on what I had read about the shows the project usually produces.
Despite all good will I have towards noise music and Mind Flare Media, I just could not get into this album at all. Don't get me wrong, I don't think that this album is terrible, I actually find quite a few tracks on here to be rather interesting, but the whole album is brought down by some over-long mediocre tracks that just took forever to end. Now, it's not like the whole album is like that, in fact I actually thought the first half of the album was pretty solid with some interesting ideas that felt developed and well-rounded while not sticking around for too long. I actually thought that Xxxatik Xxxtasee Waves! was a decent track for the first three or so minute, but the entire track is almost ten minutes, with the roughly six and a half minutes remaining just droning on and on. In addition to that, the entire album is almost eighty minutes long, and I'm all for long albums, but there was no reason for this album to be that long, at least in my opinion. If you've looked into some of my other reviews, you should know that I have absolutely no problem with drone album, with noise albums, or with a mixture of the two, on the contrary, I actually have found several that are really enjoyable, but this album just didn't have enough ideas to keep the latter half of this album entertaining, at least for me anyway. I guess I just wanted something more along the lines of a payoff from at least one or two of these songs to make it feel like this album was going somewhere, but like I've said above, that climax just never came.
Now, I take no pleasure in saying that this album is just plain boring. It's not a trait I like to say about any album, good or bad, because I think that an album, no matter my opinion, or anyone elses opinion for that matter, should keep a listener's attention and make them feel something, but this just continually made my eyelids close a little bit more the longer it went on. If you're a fan of noise being filtered through other genres, definitely check this out, but if you're not already a fan of noise, there are places that are a lot easier to start.
Overall Score: 5
Highlights: Psychodelic Stunt Academy!, Earlobes of Shame Buckets of Bile!, Blinded By The Claws of The All Seeing Eye!
Posted by maskofgojira at 7:43 PM