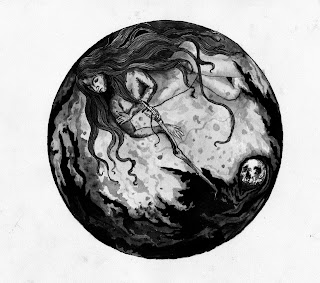 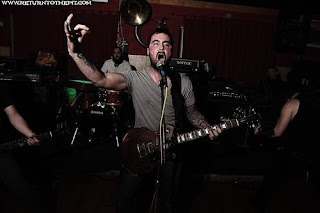 In the wake of groups like Ash Borer becoming more "popular" as they've become in the last year through high profiled releases that really brought new light onto the American black metal community, there needs to be a new group to take their place in the underground. Vattnet Viskar first caught my attention when they released a track from this EP (maybe a month ago) and I certainly enjoyed it. Obviously, that has lead me to finally being able to cover this new EP from the band.
The three tracks that make up this EP showcase a group who are obviously not only talented at their instruments, but also have a solid grasp on dynamics. I have to say, I'm a guy who happens to enjoy longer songs, but there are groups out there who write long songs that go absolutely nowhere (not that I really cover any of those bands, but you can rest assured that they're out there). I like it when a band can keep a song going for an extended period of time and kind of just ride it out for as long as the section kind of motivates them to go. I found that especially true on the closer, Barren Earth, which, essentially, and I probably am oversimplifying it here, made use of a single riff, and then a variation on that riff for the last six minutes of the track, and it totally worked. It was hypnotic, propulsive, and engaging throughout and has yet to sound boring in any way after several listens through it. It kind of reminds me of what Opeth did with the title-track off their Deliverance record and how they closed out that song with a simply amazing progression that lasted for around the same amount of time. But I don't want to simply disregard the first two tracks on here because while they are solid, I found that it all sort of built up to the last track, though the first two are certainly strong in their own regard, aggression and melody, in my opinion. The production is also a bit cleaner than what one might expect from a band that's this underground, but it suits them well and brings a warmth to these songs as they charge forward.
I highly recommend this and really hope that these guys continue to put out material as strong (or hopefully stronger) than this EP in the future. After hearing this I really want to hear more from these guys (I also think that these guys would put on a killer live show as well judging by these songs alone). Definitely check this out if you're at all interested in atmospheric black metal done in the vein of groups like Ash Borer or Fell Voices.
Overall Score: 8
Highlights: Barren Earth
Posted by maskofgojira at 11:10 PM