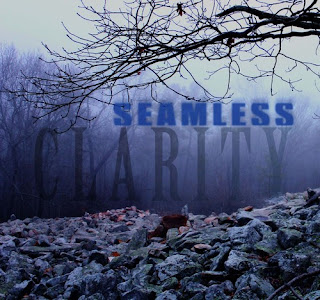 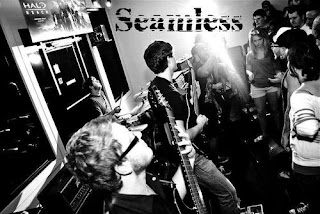 I don't think it's any secret that I'm a fan of djent bands. In the two years I've run this blog, bands that have helped to establish that scene have made it considerably high on my end of the year lists and I have given other high scores, if that means anything at all to you. But if you've been following that scene at all in the last year or so, two years at most, you'll know that it's just exploded. What that means is that there are bands who are interesting and bringing some interesting ideas to the table, and then you have bands who are basically just copying the bigger bands in the sub-genre and end up sounding boring and rehashed.
When it comes to Seamless, a pretty new group (they've been around for a few years now), they appear to lie somewhere in between my two opinions. I'd like to think that the djent bands that I listen to aren't just rehashing what other groups do and are doing something a little different, other opinions are certainly available, but even I'm prone to making mistakes. I have to admit that I listened to Seamless' first EP last year and was not impressed at all, it sounded like a pretty uneventful djent group with a deathcore vocalist. What changed and made me want to cover this album was the song To Sick Or Swim. When they posted that track for streaming, I was pretty impressed, I mean, the harsher vocals were still deathcore inflected, but there were clean vocals that stood out more prominently and had an interesting style. That song really got me excited to hear what the band had to offer on this full-length.
I don't know what happened next, I started listening to it and for some reason it just didn't turn out like I expected it to. For some reason the band still has more than their fare share of boring djent songs with deathcore vocals on here that sound like no progress was made at all. I'll admit that I'm not a fan of the vocals, I'm not a fan of about ninety-nine percent of deathcore bands out there, but I thought I might be able to get over my qualms with the vocals if the music had improved and now that clean vocals were being utilized more. I like the clean vocals on here, make no mistake, I think that they really have a different style to them that help the band stand out among many others, but my God, those harsh vocals just kill so many of these tracks for me, especially the screams, which I found just terrible. Songs like LSK or Patterns would have been so much better without the vocals, or most of the vocals, since their melodies are actually really good and stand out as being more progressive. The music has evolved, with many more interesting parts, though they still rely a bit too much on low-end grooves to really show any distinction from their peers at the moment. The addition of keyboards does help several songs stand out more due to the use of more atmospheric sections that contrast all the heavier ones that dominate most of these songs. Also, the longer instrumental breaks throughout the album were definitely well used and most of the solos were very well done.
I'm not crazy about the production on here though. It just feels a bit too raw for a djent record to be, I'm not a fan of super polished and clean production but on djent records it really helps for sake of the clarity of the sound, and on here when they're laying on those low-8 string grooves, sometimes they all just sort of blend together into mud, which is sad. In addition to that, I don't understand why the band felt the need to tack on these electronic outros to a handful of songs on here, since they don't add anything to the record at all. I'm also not sure instrumentals really needed to be added to this album. Despite my prejudice towards the harsher vocals on this album, instrumentals just don't feel all that necessary on this album, thus, songs like opener Gateway or later Breathing Spell or The Pivotal Moment feel rather irrelevant and actually sound like they could've just put it into another song or try and make a longer song from it. They're well performed, don't get me wrong, but this album is too much of a mixed bag to really say that the instrumentals stood out any more than the rather standard djent songs on here. They wind up just feeling like filler to me. I will say that the last five or so songs on here are definitely some of the best on the entire album, in my opinion and defintily give me hope for what the band might do in the future.
I realize that this review came off extremely negative, but that's only because I thought that this band had grown into something much more unique and interesting. I promise you that I came into this album really wanting to like it, because last year had some huge hits (for me) from the djent community and I wanted this to be one for this year. They've definitely evolved, but they still rely too heavily on rather uninteresting djent rhythms and their harsher vocals just irritate me just as much as they did on their EP. I'd recommend looking into this if you're a djent or deathcore fan, but otherwise enter into this with caution.
Overall Score: 6.5
Highlights: Clarity, A New Day, To Sink Or Swim
Posted by maskofgojira at 11:38 PM